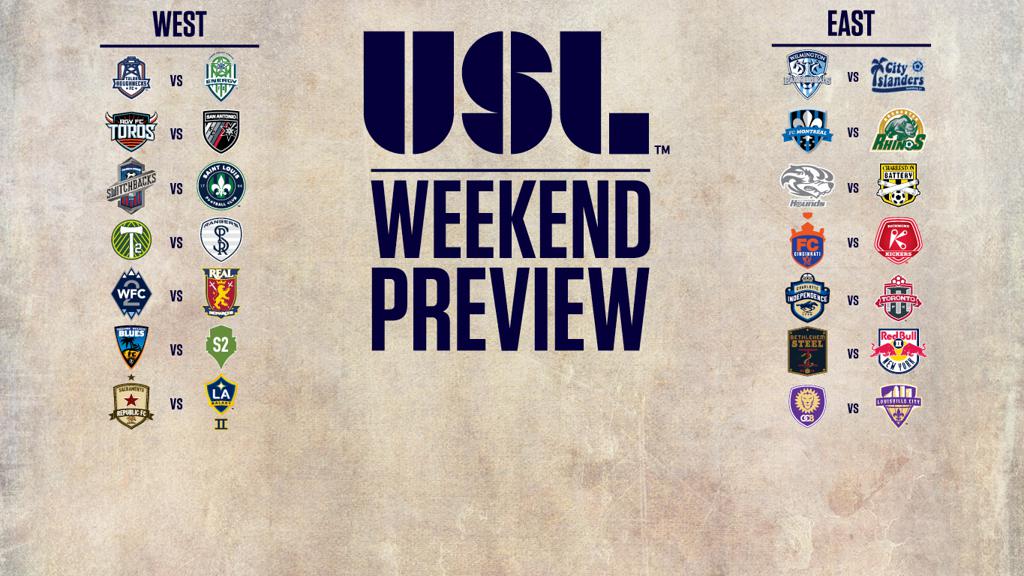 TAMPA, Fla. – The 11th week of the 2016 USL season includes a 14-game weekend slate that includes a number of big rivalry games on Saturday night. At the forefront is the clash between Sacramento Republic FC and the LA Galaxy II at Bonney Field, while games between FC Montreal and the Rochester Rhinos, and the Black Gold Derby will also feature prominently on a busy night of action.

GAMES TO WATCH
Saturday, June 4
FC Montreal vs. Rochester Rhinos
3 p.m. ET, Complexe Sportif Claude-Robillard
Montreal and Rochester meet for the second time this season with the host eager to build on its first win of the season last weekend against the Richmond Kickers as it welcomes longtime rivals the Rhinos to its home turf.

Montreal (1-8-0, 3pts) received a standout performance from goalkeeper Maxime Crepeau to earn a victory in Richmond, while a fine goal by Ballou Jean-Yves Tabla proved to be the winner at City Stadium. When the two teams met earlier this season in the Rhinos’ home opener, Montreal took a surprise lead through Charles Joly, only for the hosts to come back for a 2-1 win.

The key figure in that victory for the Rhinos (4-2-3, 15pts) was Christian Volesky, who has been a thorn in Montreal’s side each of the past two seasons. Volesky has scored seven goals in five games against Montreal over the past season-plus, and will look to help the Rhinos get back on a winning track after their 2-2 draw with Bethlehem Steel FC last Saturday.

Cincinnati (6-2-2, 20pts) is currently on a six-game undefeated streak in the league after a 2-0 win against the Harrisburg City Islanders in front of 16,097 fans at Nippert Stadium last Saturday. As it hits the midway point of a five-game home stand, Cincinnati will be hoping for continued strong play defensively after back-to-back shutouts.

Richmond (4-3-3, 15pts) will be hoping to shake off its defeat to FC Montreal last Saturday as it looks to reestablish its playoff credentials, but has struggled so far on the road this season. The Kickers are 0-3-2 away from City Stadium, something they’ll be endeavoring to change on Saturday.

Tulsa Roughnecks FC vs. OKC Energy FC
8 p.m. ET, ONEOK Field
The Black Gold Derby resumes after an enthralling series a year ago introduced the Oklahoma rivalry to the USL. Both sides took a victory apiece in the regular-season series, while two other games ended all square, as Energy FC’s win in the Open Cup Clash between the clubs saw The Grid claim the four-foot wrench that serves as the rivalry’s trophy.

A win on Saturday for Tulsa (2-7-1, 7pts) could be exactly the thing the Roughnecks need to jumpstart their season, after a 5-2 defeat to Saint Louis FC two weeks ago. Sammy Ochoa has been a bright spot for the side with six goals and three assists, but no other Roughnecks player has scored more than once this season.

Energy FC, meanwhile, hasn’t lost since the opening game of the season, and is coming off a 2-1 midweek win against Rayo OKC in the Lamar Hunt U.S. Open Cup that continued to build the club’s momentum. Energy FC is currently eighth in the USL’s Western Conference, but has played as many as three fewer games as some teams above it in the standings, giving Coach Jimmy Nielsen’s side the chance to make a big move in the next month.

Sacramento Republic FC vs. LA Galaxy II
11 p.m. ET, Bonney Field
The California rivals meet for the second time this season, but for the first time at Bonney Field, where they have faced each other in the USL Playoffs each of the past two seasons. Republic FC took a 2-0 win against Los Dos last time out, but the Galaxy II have won on both of their past two trips to Sacramento, which should make for a rousing end to Saturday’s action.

Sacramento (4-3-2, 14pts) has had an up-and-down season, and needed a late equalizer to earn a 1-1 draw with the Swope Park Rangers last weekend to claim its seventh point in its past three home games. While the side has been outstanding defensively so far, conceding a league-fewest four goals, its own finishing has needed improvement, with only seven goals so far this season.

Los Dos (5-2-5, 20pts) moved back into second place in the Western Conference last weekend as Jack McBean notched his 10th and 11th goals of the season, putting him halfway to tying the USL single-season scoring record with more than half the season remaining. In contrast to Sacramento, the Galaxy II lead the USL with 25 goals this season, with last Saturday’s game the fifth time this season they have recorded three goals in a game.

- 15-year-old Vancouver Whitecaps FC 2 midfielder Alphonso Davies became the youngest player in Canadian Championship history on Wednesday as he played for Whitecaps FC in the competition.

- The United Soccer League, in partnership with Major League Soccer, will be at the forefront of a new era in officiating as it becomes one of the first professional soccer leagues in the world to participate in The International Football Association Board (IFAB) and FIFA’s Video Assistant Referee project, announced on Thursday.

- A key Western Conference clash is set for Colorado Springs on Saturday night (9 p.m. ET | Match Center) as Switchbacks FC (6-2-1, 19pts) hosts Saint Louis FC (4-3-4, 16pts) in a battle of two top-four teams in the conference. The Switchbacks are undefeated at home this season, and would pull level on points with conference leader Vancouver Whitecaps FC with a win before WFC2’s Saturday night game against Real Monarchs SLC.

- Vancouver Whitecaps FC 2 (6-0-4, 22pts) will look to continue its undefeated streak as it hosts Real Monarchs SLC (3-4-4, 13pts) for a second consecutive game at Thunderbird Stadium on Saturday night (10 p.m. ET | Match Center). The two teams played to a 2-2 draw in the previous meeting, as Ricardo Velazco lead the Monarchs back from a two-goal deficit to earn a point on the road.

- Rio Grande Valley FC (4-2-4, 16pts) and San Antonio FC (2-4-4, 10pts) will meet on Saturday night (8:30 p.m. ET | Match Center) for the third time this season, but the first at the UT RGV Soccer Complex. The Toros hold a 1-0-1 edge in the series thanks to their 3-2 win in the first meeting between the teams, and are undefeated in their past four contests entering the game.

- Bethlehem Steel FC (3-3-4, 13 pts) hosts the New York Red Bulls II (6-1-3, 21pts) on Sunday (4 p.m. ET | Match Center) for the first meeting between the teams since the Red Bulls II took a 4-0 win on home turf in April. Since then, the Steel have gone 2-1-4 to move into the fringes of the Eastern Conference playoff race, and will be looking for revenge from the heaviest defeat of their inaugural season.