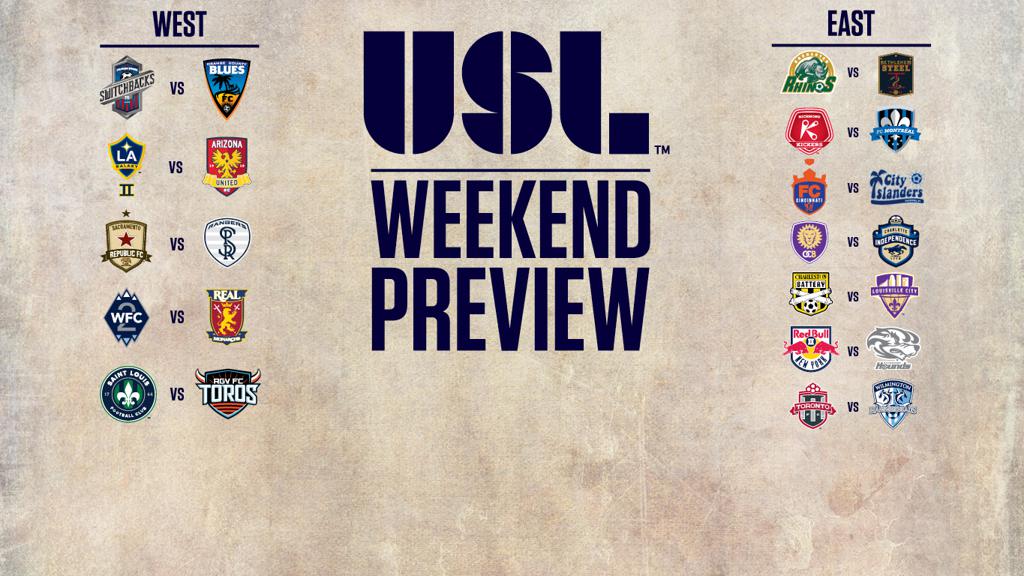 TAMPA, Fla. – The 10th week of the 2016 USL season includes a 12-game weekend slate that kicks off Friday night. On Saturday, the Charleston Battery put their two-year long home undefeated streak in the USL on the line against the Eastern Conference’s leader, and two teams that are in the middle of the Western Conference playoff race square off on Sunday night.

The Switchbacks (6-2-0, 18pts) have moved into second place in the Western Conference thanks to a three-game winning streak that continued last Saturday night with a 3-1 win against Arizona United SC. A perfect 3-0-0 at home, Colorado Springs has yet to concede a goal at Switchbacks Stadium this season, making it one of the more formidable fortresses in the league.

Orange County (3-4-2, 11 pts) closed April with a three-game winning streak, but a 3-0 defeat to the Switchbacks on May 8 began a three-game slide that has seen the Blues take only one point and fall out of the top eight. After a 3-1 defeat on the road to Real Monarchs SLC last Saturday, the Blues will want to end the month on an upswing to get back into the playoff race.

Saturday, May 28
Charleston Battery vs. Louisville City FC
7:30 p.m. ET, MUSC Health Stadium
Eastern Conference-leading Louisville City FC visits the Charleston Battery on Saturday night for the first meeting between the teams since their Eastern Conference Semifinals clash in the 2015 USL Playoffs with the chance to do something no USL team has done in more than two years.

The Battery (5-2-3, 18pts) have not lost a USL regular season or playoff contest in more than two years, and would run their streak to 30 games with a win or a draw against Louisville. Coach Mike Anhaeuser’s side has hit a good run of form of late as well, with wins in each of its last three games to move within three points of Louisville at the top of the Eastern Standings.

Louisville (6-1-3, 21pts) extended its undefeated streak to eight games last weekend as it played to a 0-0 draw in blustery conditions on the road against the Richmond Kickers. City has not conceded a goal in its last four games, and sits in the top six in the USL in both shots and shots on goal, which should offer a strong test for a Battery defense that has also recorded back-to-back shutouts.

Republic FC (4-3-1, 13pts) is currently on a two-game winning streak in the league, and is coming off a pair of exhibitions against Liverpool FC U21s over the past week that saw new signing Daniel Trickett-Smith introduce himself with a spectacular free kick goal in a 2-2 draw on Wednesday night. Trickett-Smith could make his USL debut on Saturday against the Rangers.

Swope Park (3-4-1, 10pts) has found itself moving in the wrong direction in the standings over the past month, with just one win in its last five games. Some of the club’s players have found success in Sacramento previously, however, including forward Kris Trypak, who scored the only goal in a 1-0 win for the Austin Aztex last season.

STLFC (4-3-3, 15pts) claimed a thumping 5-2 victory against Tulsa Roughnecks FC last Saturday night, and then earned a 1-1 draw against the still-undefeated Vancouver Whitecaps FC 2 on Wednesday night. Saint Louis is undefeated at home this season, and is 4-0-2 over its last six games at World Wide Technology Soccer Park dating back to last season.

The Toros (4-2-3, 15pts) also took a big win last Saturday as they defeated the Swope Park Rangers 4-1 on their home turf. On Wednesday, they were held to a 0-0 draw by San Antonio FC in the USL Game of the Week on ESPN3 as SAFC goalkeeper Josh Ford and RGV goalkeeper Calle Brown both put in big performances. The Toros are undefeated in their last five games on the road, which should make for an engaging first meeting between the two clubs.

- The Rochester Rhinos will look to extend their home undefeated streak to 24 games on Saturday night when they host Bethlehem Steel FC (6:05 p.m. ET | Match Center). The Rhinos were the only other side in addition to Charleston to go undefeated at home in 2015.

- Irvin Herrera’s four-goal game for Saint Louis FC last Saturday against Tulsa was the first in the USL since Matt Fondy for Louisville City FC on August 12, 2015 against Harrisburg.

- The Charleston Battery will unveil their new video board this Saturday when the club hosts Louisville City FC. Measuring almost 3,000 square feet, the board’s installation was completed over the course of the past week as one of the stadium upgrades undertaken by new owners B Sports Entertainment.

- FC Cincinnati (5-2-2, 17pts) and the Harrisburg City Islanders (4-5-1, 13pts) will square off at Nippert Stadium on Saturday night (7 p.m. ET | Match Center), with Cincinnati expecting another five-figure crowd as it looks to extend a five-game undefeated streak. The two teams played to a 1-1 draw earlier this season in Harrisburg.

- Vancouver Whitecaps FC 2 (6-0-3, 21 pts) will look to move its undefeated start to the season into double-digits when it hosts Real Monarchs SLC (3-4-3, 12pts) on Sunday afternoon (5 p.m. ET | Match Center) at Thunderbird Stadium.

- Fourteen USL teams are set to compete next Wednesday in the Third Round of the 2016 Lamar Hunt U.S. Open Cup, with Colorado Springs Switchbacks FC visiting Arizona United SC in the lone all-USL matchup.