WFC2 Vaults into First in West 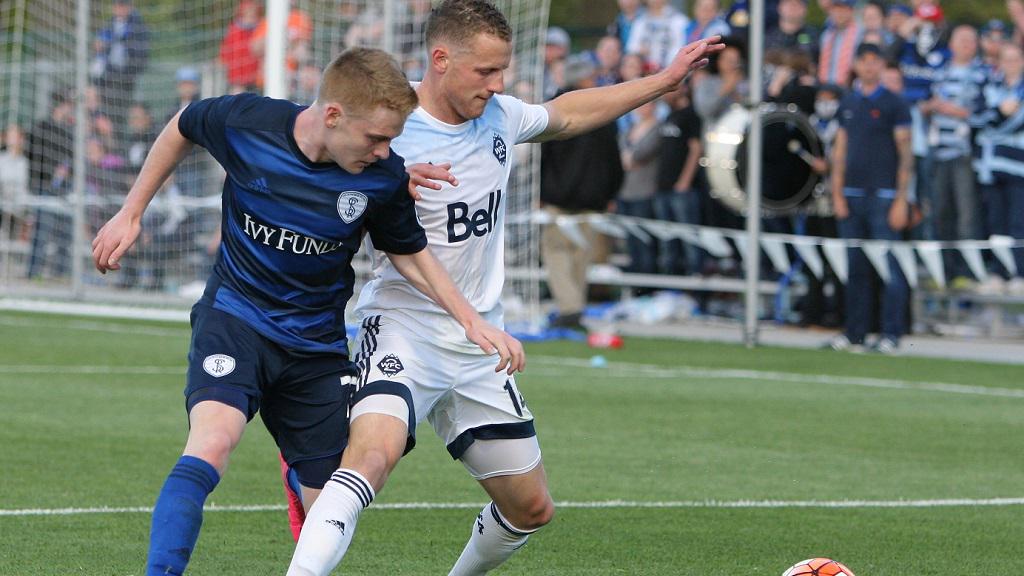 WFC2 captain Kyle Greig converted a first-half penalty kick for Vancouver to begin the team’s rally and move into first place in the Western Conference ahead of the LA Galaxy II. The club remained one of only three unbeaten teams in the USL this season, improving to 3-0-2 (11 points). The other unbeaten sides are the Galaxy II (2-0-4, 10 points) and the Eastern Conference’s New York Red Bulls II (3-0-2, 11 points)

Swope’s Kris Tyrpak scored the game’s first goal in the 15th minute, but his side would eventually drop its second straight match, moving to 2-2-1 (7 points) on the season.

Swope started off Wednesday’s match on the right note with the game’s first goal in the 15th minute with a buildup from the back. Going through Daniel Salloi, he split a pair of WFC2 defenders with a through ball to Tyrpak who got behind the back line and in particular past Brett Levis. Once Tyrpak received the ball one-on-one against Vancouver goalkeeper Spencer Richey, he calmly paused for a split second when Richey leaned to his right and Tyrpak slotted in the opposite direction for the 1-0 lead.

Tyrpak, who scored nine goals during the 2015 season, notched his first goal of the 2016 campaign.

Vancouver’s attack stepped up significantly after the goal, and in the 29th minute, Alphonso Davies earned a penalty kick when he was tripped up by Swope defender Jacob VanCompernolle. Greig converted the penalty kick in the 30th minute, slotting to the inside of the left post while Swope goalkeeper Jon Kempin anticipated the other direction as the two teams were tied at 1-1.

Greig leads WFC2 with four goals this season. He now has 26 career goals, putting him in a tie with Dennis Chin for eighth place all-time on the USL’s goal-scoring list.

WFC2 had an interesting exchange before halftime in the 44th minute when Davies beautifully chipped the ball over a couple of Swope defenders. Greig rushed in toward the near left post with Kempin also in pursuit off his line. Greig attempted a right-footed volley, across his body, but directed the ball over the crossbar.

In the 54th minute, WFC2’s initial attack was foiled as Kempin and the Swope defense briefly averted Vancouver’s first attacking moment. Then on a 50-50, Greig headed the ball to McKendry. From 30 yards out, McKendry fired a dart inside the right post past Kempin to take a 2-1 lead for WFC2.

Swope had a number of corner kick opportunities and buildups to find the equalizer for the majority of the second half, but the host side struggled to put much on frame against Richey. In the 78th minute, Tyler Pasher’s long-distance, left-footed shot from the right side went just wide left of the frame and would have lit a fuse for the Rangers.

USLSoccer.com Man of the Match
Kyle Greig, Vancouver Whitecaps FC 2 - The WFC2 captain scored an important equalizer and then set up the impressive game-winner by Ben McKendry to move into first place in the Western Conference.