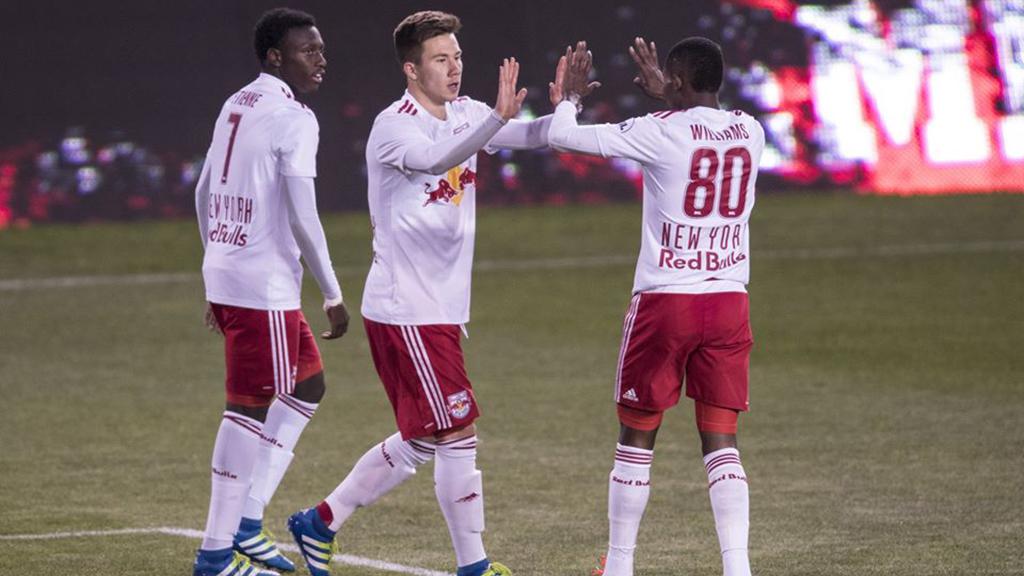 After the unpredictability that shook up last week’s rankings, this weekend was more settled with only the Swope Park Rangers taking a serious tumble after their first loss of the season.

For the New York Red Bulls II, a solid display on the road keeps them at the No. 1 spot, while the only new entrant to the Top 10 is Rio Grande Valley FC after the Toros ended their stint on the road with a victory against Real Monarchs SLC.

After falling on the road to open the season in Tulsa despite outshooting their hosts 22-12, the Toros have gone on a solid run of form ahead of their home opener this Saturday, which will see the LA Galaxy II come to visit. The Running of the Bulls in Pamplona may not arrive until July, but in New York and the Rio Grande Valley, both sides are stampeding strongly.

1. New York Red Bulls II (Previous: No. 1)
Last Week: W 1-0 at Wilmington Hammerheads FC
The Red Bulls maintained their hold on the top spot with a solid 1-0 victory on the road against Wilmington that saw Dan Metzger score his first goal since an injury derailed his rookie season last summer. The side has yet to concede in the second half this season, a mark of how difficult the Red Bulls II have been to break down after securing a lead.

2. Louisville City FC (Previous: 3)
Last Week: W 3-2 at Harrisburg City Islanders
Louisville took its third consecutive victory behind another pair of goals by Chandler Hoffman, but almost dropped a game it could have had well in hand after taking a 2-0 lead against Harrisburg on Friday. A win is a win, however, and Coach James O’Connor’s side can now look forward to the national spotlight on its home turf on Wednesday night as it hosts Pittsburgh.

3. Colorado Springs Switchbacks FC (Previous: 6)
Last Week: W 1-0 vs. San Antonio FC
The Switchbacks got back to winning form against San Antonio despite the early departure of goalkeeper Devala Gorrick due to injury, as Billy Thompson proved a more-than-adequate replacement. The Switchbacks haven’t been as prolific in front of goal as a season before, but the defensive improvement Coach Steve Trittschuh was looking for is evident with the side having conceded only twice in four games.

4. LA Galaxy II (Previous: 4)
Last Week: D 2-2 vs. Vancouver Whitecaps FC 2
The Galaxy II hold steady this week, although there was a temptation to have them switch spots with Vancouver after WFC2’s strong fightback saw the visitors earn a point at StubHub Center. As good as Los Dos have looked going forward, Coach Curt Onalfo will be perturbed by the fact that in each of the past three games his side has lost a lead, which has led to a four-game run of draws.

5. Vancouver Whitecaps FC 2 (Previous: 5)
Last Week: D 2-2 at LA Galaxy II
WFC2 did an excellent job of coming back to maintain its undefeated record against the Galaxy II, with Fatawu Safiu leading the way on a pair of excellent goals that showed off the attack’s continued efficiency when given a sight of goal, with two-thirds of the club’s shots finding the target so far. One thing that will need to improve, though, is the way Vancouver starts games; WFC2 has yet to score in the first half this season.

6. Charlotte Independence (Previous: 9)
Last Week: W 3-2 vs. Richmond Kickers
Back-to-back wins against the Charleston Battery and Richmond Kickers will get you respect, and while the Independence will be hoping to improve the way they close out games late as the season goes on, you can’t fault Coach Mike Jeffries’ side’s ability to get things done. Enzo Martinez has been the driving force, but there are an awful lot of good pieces surrounding him that are helping this success.

7. Charleston Battery (Previous: 7)
Last Week: D 0-0 at Bethlehem Steel FC
The Battery’s defense looked back to its normal self against Bethlehem on Sunday, and Charleston could have grabbed a victory had it been a little sharper in front of net. The Battery return home happy enough with a point, however, and now return home looking to add to their perfect record at MUSC Health Stadium this Saturday night.

8. Orange County Blues FC (Previous: 10)
Last Week: W 1-0 vs. Portland Timbers 2
A second win in a row for the Blues continued more good signs as to the team’s growth last Wednesday night, with Trinidad & Tobago forward Trevin Caesar’s first goal for the club the main one. Now Coach Oliver Wyss’ team will head to Sacramento on Saturday looking to replicate its victory last season against a Republic FC still trying to find its best form.

9. Swope Park Rangers (Previous: 3)
Last Week: L 1-0 vs. OKC Energy FC
The first loss for the season was a tough one for the Rangers, as the side put in a strong performance but eventually fell on the road to Energy FC. Swope Park will get a quick chance to bounce back, but should also get another interesting test on Wednesday night as Vancouver Whitecaps FC 2 visits for the club’s first game at Children’s Mercy Victory Field at Swope Soccer Village.

10. Rio Grande Valley FC (Previous: NR)
Last Week: W 1-0 at Real Monarchs SLC
Seven points from their last three games, all on the road, has been a solid return for the Toros as they prepare for the club’s home opener against the LA Galaxy II this Saturday. One of the main reasons has been the form of forward Jose Escalante, who reportedly will spend time training with the Houston Dynamo this week after an excellent run of form.