Okoli Thrilled by Experience in Cincinnati 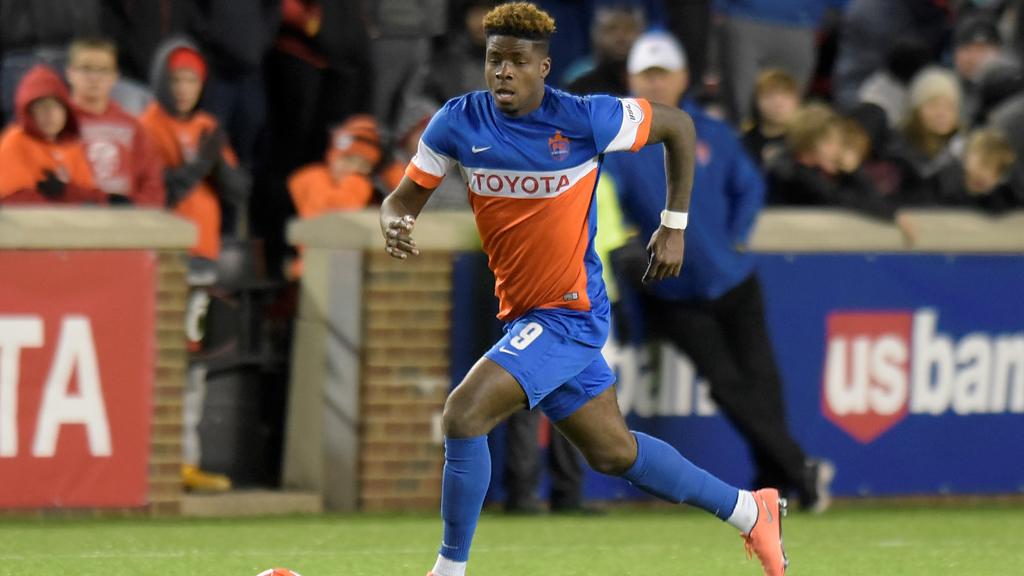 When the idea of FC Cincinnati came to fruition and the club started accruing players, nobody within the organization quite knew the level of support the city would offer. There were expectations, and a desire to draw significant crowds to prove that the area can support a professional team, but after the club drew nearly 15,000 fans to its first home game at Nippert Stadium, and a USL regular-season record attendance of 20,497 this past Saturday against rival Louisville City FC, everyone involved with FC Cincinnati has been delighted with the support the club has garnered thus far.

Promising young forward, and leading scorer, Sean Okoli is among those at the club who are thrilled with how quickly fans have taken to the expansion club.

“To be honest, we did not expect it, but the fact that they are out there to support us shows that they really believe in us and they want to see some good football,” Okoli said this week. “We try not to get too nervous, take a deep breath and remember they are out to watch us.

“Having all the fans supporting us and cheering us on the whole game is just something that motivates us, pushes us throughout the game. The fact that we even got up to 15,000 and 20,000 last week, it is something unheard of. We are very grateful, and we just want to keep getting results. It is all about getting results and entertaining the crowd at the same time.”

Okoli certainly provided great entertainment early in the club’s first game at Nippert Stadium. In just the fifth minute against the Charlotte Independence, Corben Bone took advantage of a short defensive clearance and set up Okoli for an impressive side-volleyed finish that resulted in a highlight-reel goal.

The goal drew attention from around the globe, as it landed at No. 4 on ESPN’s SportsCenter Top 10, and earned a place in The Guardian’s best goals of the week.

As impressive at his audacious attempt was to fans, Okoli is modest about the feat.

“It is just instinct to me,” said Okoli. “I thought that I could pop it up and give it a clean strike and it could hit the target. I just saw an opportunity and I seized it. It was all instinct really.” 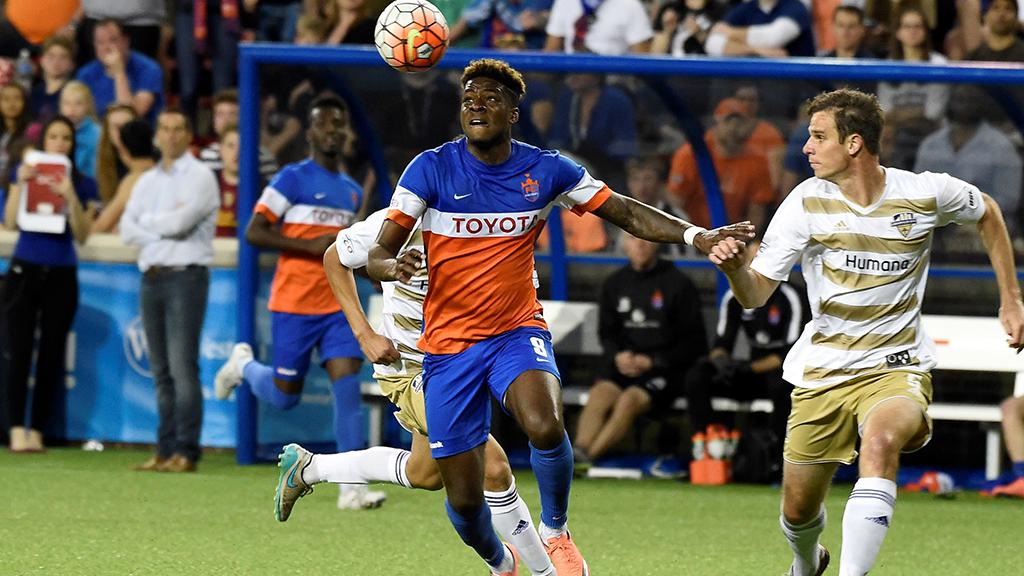 As impressive as Okoli has been this early into the 2016 USL season, if it were not for a lack of opportunities at the MLS level, the young forward may have never landed in the Queen City.

After attending Wake Forest University where he racked up 24 goals and earned First Team All-ACC honors in 2014, Okoli signed with Seattle Sounders FC as a Homegrown Player. With forwards Clint Dempsey and Obafemi Martins ahead of him on the depth chart – and with Seattle Sounders FC 2 not yet in existence – Okoli found minutes on the field hard to come by during the 2014 MLS season. The Sounders traded the Wake Forest alum to the New England Revolution prior to the 2015 MLS season, but the quality of forwards on the Revs’ roster left Okoli with scant opportunity to earn significant minutes once again.

Heading into the 2016 preseason, Okoli found himself in the same situation. After Okoli and the Revs agreed it that was best for him to seek other opportunities, the Revs waived Okoli in February.

With myriad options on the table following his release, Okoli’s relationship with John Harkes, someone he met through Harkes’ son Ian at Wake Forest, proved to be a big factor in signing with FC Cincinnati.

“When I was looking at options it was a big year for me in terms of getting games, so I was trying to figure out what fit me the best,” Okoli said. “Having John [Harkes] and [Assistant Coach Ryan Martin] here as the coaches, and I knew a couple of the players that signed with the team, I knew it would be a good setup.”

Since signing for Cincinnati, Okoli has seen his role on the field grow. Where he was once only getting sparse opportunities to play, the 23-year-old now finds himself as a focal point of Cincinnati’s attack. He welcomes the transition. 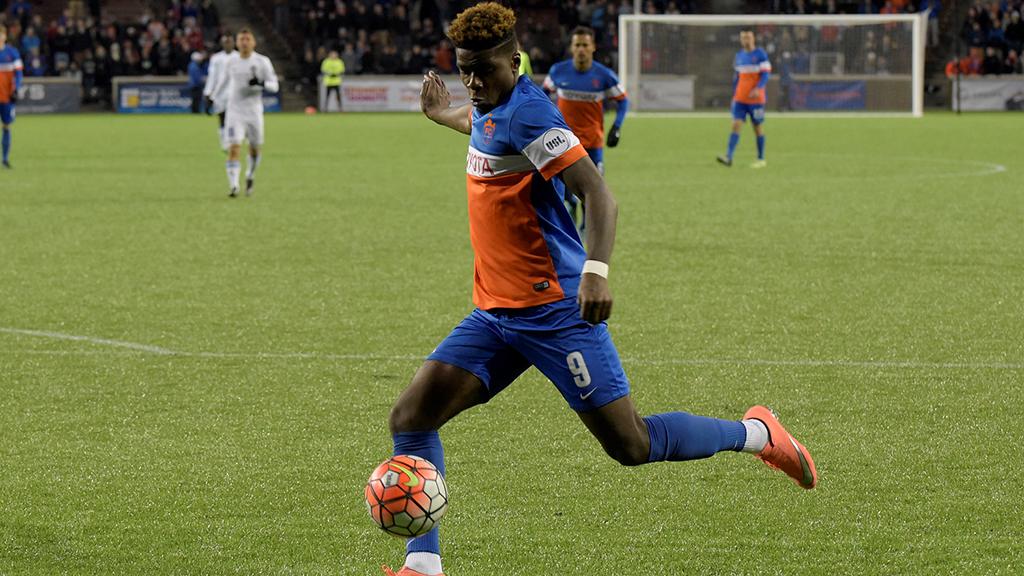 “I think it is a huge step for me personally,” said Okoli. “Being where I was at in Seattle and New England, I didn’t get much playing time, but I thought when I got an opportunity that I made the most of it. The biggest thing for me was learning from top players like Clint Dempsey and Obafemi Martins [in Seattle], and learning things from Lee Nguyen and Charlie Davies over in New England. … It is nice that I can work on it consistently in games here.”

In just four games with Cincinnati, Okoli has lived up to his desire and has proven that he can make an impact.

“One thing about John that I really like about him as a coach is that he lets me be free up front, and he gives me the confidence to try anything I can to make an impact,” he said. “Knowing that I can go out there and play the way I want to play and that he is going to support me 100 percent it just helps.”

Now that he has the opportunity to perform on a weekly basis, Okoli has been able to help lead the first-year club to a respectable start in the USL. Cincinnati sits on six points in the Eastern Conference four games into the season, just three points behind first-place Louisville.

As promising as both Cincinnati’s start and Okoli’s play has been, he acknowledges that everyone within the Cincinnati locker room wants more moving forward.

“We’re most definitely not content on where we’re at,” said Okoli. “We’re still learning each other, it’s a brand new club, so there are little things that you have to work on, fix, and sort out, but I think it has been good so far. We’re still trying to build and get better each game, but I know that we have the talent and the potential to do a lot this year.”