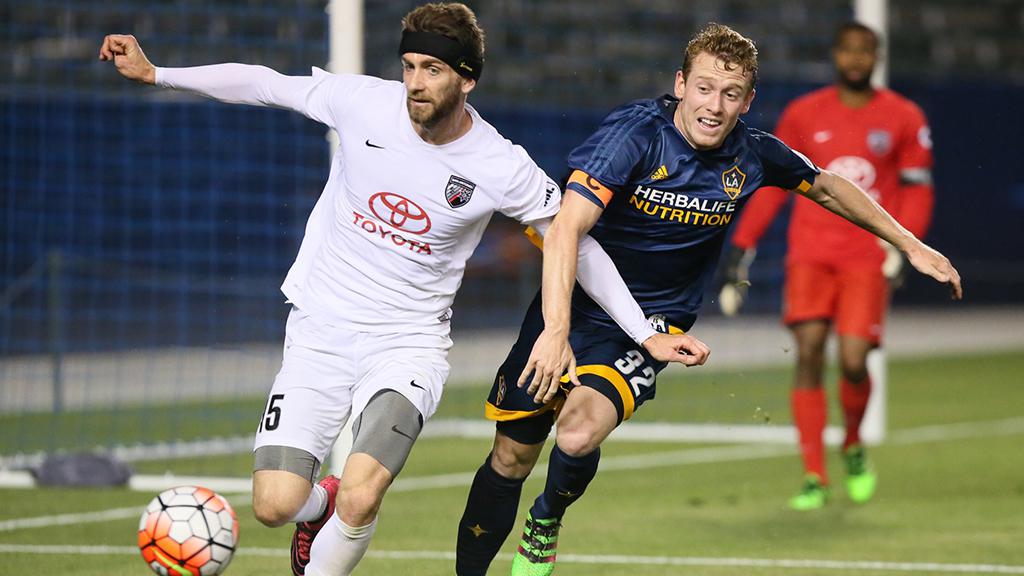 CARSON, Calif. – The side’s undefeated record appeared to be slipping away on Wednesday night, but San Antonio FC found a way to grab a point late on as Carlos Alvarez’s goal earned a 1-1 draw with Western Conference leaders the LA Galaxy II at StubHub Center.

Despite being down, and under some pressure as Los Dos looked to add to their lead throughout the second half, Coach Darren Powell was pleased with the resilience his side showed in finding a way to take something from the contest.

“First and foremost, I’m really proud of the guys for playing to the final whistle,” Powell said. “We managed to get a point thanks to a really good strike from Carlos Alvarez in front of his family. I think at that moment we were really excited to get the draw.”

Returning to his former stomping grounds with Chivas USA, Alvarez seized upon a flicked header in the 89th minute to roof home a finish that left LA goalkeeper Clement Diop helpless. With numerous friends and family in the stands, the native of Los Angeles was thrilled to have made the difference for his side.

“I was hungry all game for a chance to get a shot on goal,” Alvarez said. “I knew if I got that chance I'd put it in the back of the net and get those points for my team.”

The second selection in the 2013 MLS SuperDraft, Alvarez was San Antonio’s first signing earlier this year following the formation of the club. After recording his first assist for the side in San Antonio’s 1-1 draw against the Swope Park Rangers on Saturday night, getting his first goal was a special moment in his hometown.

“Playing in front of my family, girlfriend and her family, and my friends is always a plus,” Alvarez said. “I am just happy they have my back and they’re cheering for the squad and myself. I am happy to be back home and play in front of my people.”

San Antonio will remain out west for Saturday night’s contest against Orange County Blues FC, with Powell looking for some improvement on certain facets of the club’s play.

With another point on the road in hand, though, the club will head to Anteater Stadium with some confidence more good things are on the horizon.

“It wasn’t as fluid as we perhaps like, and the final quality still needs to improve,” Powell said, “but overall to come earn a point against the Western Conference champions on the road is something we will really value.”