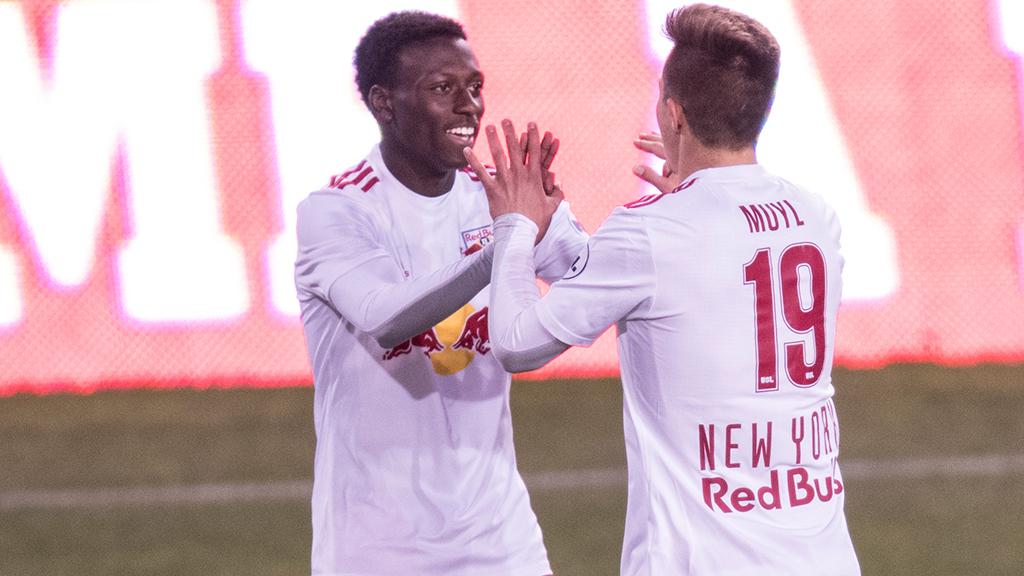 HARRISON, N.J. – The first goal came only 10 seconds into the game. The second, minutes later. Ryan Meara saved a penalty. Then halftime with a three-goal lead, followed by a final whistle with a score line of 4-0.

The New York Red Bulls II won their first home game of the year on Sunday night as they dominated Bethlehem Steel FC for 90 minutes. Head coach John Wolyniec watched with delight as his squad built on the early own goal, by Steel center back Joshua Yaro, to continue its impressive start to the 2016 USL season.

“I think we did very well,” Wolyniec said. “We preach fast starts and that’s what we did. We didn’t give them much during the game, but Ryan [Meara] helps us by saving a penalty kick and keeping the score where it is.”

Wolyniec has presided over a comeback 2-2 tie against Toronto FC and a 2-0 win against Louisville FC on the road. Being on both sides of a 2-0 scoreline had Wolyniec focusing on preparing his side for what is considered by some as the most dangerous lead in soccer.

“When you’re up 2-0 at home, you’re feeling good,” Wolyniec said. “You give up the penalty kick and don’t want it to [the game] to get away from you. We escaped some danger by luck, or somebody makes a play. It’s important when you’re up 2-0 to keep it going and we got a third.”

The former striker was pleased by the contributions of some of his younger players. Derrick Etienne, Jr. and other youthful members of the squad, such as Brandon Allen and Junior Flemmings, made a notable impact while playing alongside NYRB striker Anatole Abang, and MLS veteran Amobi Okugo.

“He made a good play at the beginning of the game, and helps us get a lead,” Wolyniec said of Etienne. “He probably had a decent game the first game of the year, then a better game and a pretty good game today. I was impressed with the volume of work he put in. Two of the plays he made were off of turnovers and he was able to get forward. We just want to make sure he contributes in every way, and he’s getting there.”

Wolyniec is excited by the number of quality players he has to choose from, but cautioned that a rotation of players is likely to continue due to the amount of depth at his disposal.

“It’s going to be tough,” Wolyniec said of players like Flemmings, who came off the bench despite a goal in his debut – and a starting role – last week. “These guys aren’t given playing time. Part of development is fighting for time. You have to earn [minutes]. It’s important to have depth.”

Figuring out the best way to keep the chemistry growing among the team is something Wolyniec admits is difficult for him to pin down at the moment. Wolyniec pointed to the philosophy installed across the New York Red Bull system by Ali Curtis and Jesse Marsch as a way to enable his players to have something to anchor themselves amongst the lineup turnover and rapid changes to playing time or roles.

“I’m still learning,” Wolyniec said of how his lineup choices affect the team’s chemistry. “Luckily, this team is within a club that has a philosophy and a style of play, and that gives you some chemistry right off the bat. When the roles are defined well, the pieces can move around and grasp onto something. That’s been successful for us.”