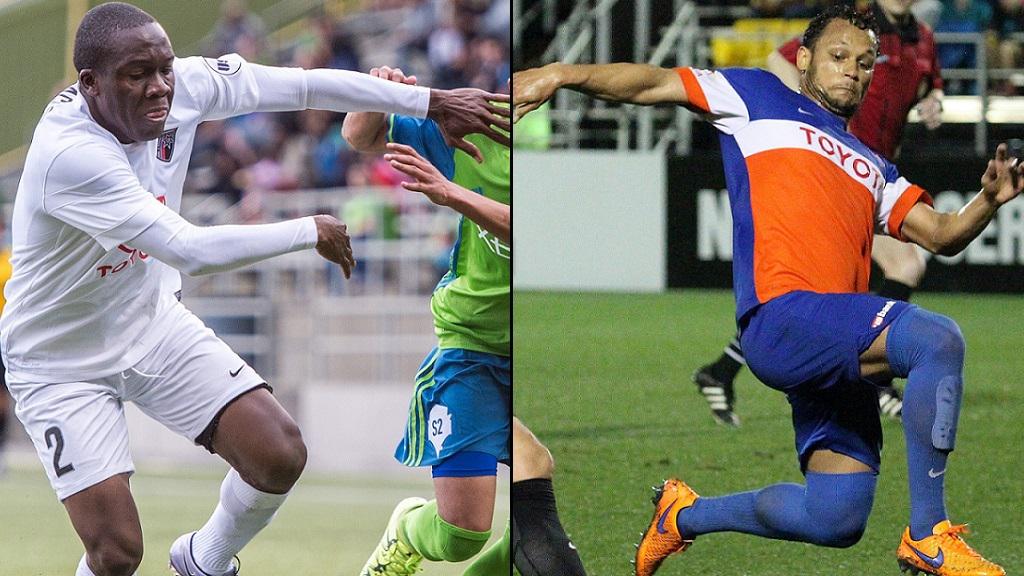 TAMPA, Fla. – The third week of the 2016 USL season features 13 games from Friday through Sunday, with one of the big spotlights on the first home openers for Western Conference expansion side San Antonio FC and the Eastern Conference’s FC Cincinnati.

One anticipated game that has been postponed is the Keystone Derby between the Pittsburgh Riverhounds and Harrisburg City Islanders, originally to take place Saturday. Because of inclement weather conditions expected to move through Western Pennsylvania this weekend, the matchup has been rescheduled for Sunday, July 17, with the kickoff time to be announced at a later date.

GAMES TO WATCH
Saturday, April 9
Richmond Kickers vs. Rochester Rhinos
5 p.m. ET, City Stadium
In the early going this season, the Kickers are the only Eastern Conference side to post three goals in one game. But after their impressive 3-1 showing against the Harrisburg City Islanders, they were held in check last week during a 0-0 draw against Wilmington Hammerheads FC.

Richmond’s attack will have the challenge of facing longtime foe Rochester, the defending USL Champion. The Rhinos touted the best defense in the league last season and started off this year with a 1-0 road win against the Pittsburgh Riverhounds.

Richmond had one of the best showings against Rochester last season, posting a pair of draws during the Rhinos’ run to a 17-1-10 regular-season record. Their last meeting was a scoreless draw on Sept. 5, 2015, at City Stadium. The other match was a 1-1 draw on Aug. 9, 2015, in Rochester. Kenardo Forbes scored Rochester’s goal, and the team’s rather stout defense gave up an own goal three minutes later.

San Antonio FC vs. Swope Park Rangers
8:30 p.m. ET, Toyota Field
Two of the Western Conference’s expansion sides are off to great starts in their inaugural campaigns. SAFC prepares for its home opener against Swope, and both teams should feel some optimism heading in.

With the backing of a sellout crowd expected, San Antonio carries some good momentum following a 3-0 road victory against Seattle Sounders FC 2. Jason Johnson led the way with a first-half brace. The Rangers are 2-0-0 to open their first USL season. They recently posted a 2-1 road win against Tulsa Roughnecks FC, which included the first tally of the season by striker Dane Kelly.

Sunday, April 10
Vancouver Whitecaps FC 2 vs. Sacramento Republic FC
6 p.m. ET, UBC Thunderbird Stadium
WFC2 and Sacramento are off to strong 2-0-0 starts, making this weekend’s matchup a crucial one at the top of the Western Conference standings. Success at Sacramento has been a given in two previous seasons, winning the 2014 USL Championship and qualifying for the 2015 USL Playoffs. Vancouver, on the other hand, is coming off a 2015 season in which it finished 11th out of 12 teams in the West.

Thanks to the contributions of captain Kyle Greig and Daniel Haber, WFC2 is off to a quick start. Both players have two goals this season as Vancouver posted road wins against defending Western Conference regular-season champion Orange County Blues FC and the Portland Timbers 2.

Sacramento has a pair of 1-0 wins under its belt against Seattle Sounders FC 2 and Arizona United SC. The defense has been Republic FC’s story as its opposition has been able to generate only one shot on goal in two games.

MILESTONES
- Swope Park Rangers forward Dane Kelly is the league’s all-time leading goal-scorer with 43 during his career. The former Charleston Battery striker scored his first goal with the Swope Park Rangers on April 2 during a 2-1 victory against Tulsa Roughnecks FC. Kelly sits two goals ahead of the Richmond Kickers’ Matthew Delicate (41).

- The Charleston Battery will look to extend the league’s longest current home unbeaten streak when they host Wilmington Hammerheads FC on Saturday at MUSC Health Stadium. Charleston has posted a 17-0-9 record over its past 26 games, including the 2015 Eastern Conference Quarterfinal win against the Richmond Kickers. The team’s last home defeat occurred on May 10, 2014, a 1-0 loss to Wilmington Hammerheads FC.

OTHER NEWS AND NOTES
- The I-405 Derby opens its 2016 edition when the LA Galaxy II host Orange County Blues FC on Friday at StubHub Center. Last year’s postseason contenders have been on different paths this season. The Galaxy II, who advanced to the 2015 USL Championship, are off to a 2-0-1 start and recently rallied from three goals down to post a 3-3 road draw against Real Monarchs SLC. The Blues, the regular-season champions of the Western Conference a year ago, are 0-2-0 this season, most recently falling 3-1 to Saint Louis FC at Anteater Stadium. Los Dos are 7-1-1 all-time against the Blues, including a 2-0 win against Orange County in last year’s Western Conference Semifinal.

- Second-year side Saint Louis FC might be new to the Western Conference this year, but the club is quite familiar with Saturday’s opponent OKC Energy FC. OKC hosts Saint Louis on Saturday at Taft Stadium, and the two teams faced each other twice last season in conference crossover matches. Saint Louis earned a 2-1 victory against Energy FCon April 25, 2015, the last time they met in Oklahoma, and then they played to a scoreless draw on July 25, 2015, at World Wide Technology Soccer Park. Energy FC was idle in Week 2 following its opening-week 2-1 loss to Colorado Springs Switchbacks FC. Saint Louis wraps up a rigorous four-game road trip. After dropping its first two matches against Real Monarchs SLC and the LA Galaxy II, STL FC rebounded with a 3-1 win at Orange County Blues FC.

- Louisville City FC, which formerly was a partner with Major League Soccer’s Orlando City SC, will go up against its new USL side Orlando City B on Saturday at Slugger Field. Louisville Head Coach James O’Connor played in 41 matches for Orlando City when the side was in the USL before making the move to MLS. OCB (0-1-1) hits the road for the first time this season.

- FC Cincinnati hosts the Charlotte Independence on Saturday at Nippert Stadium as Cincinnati gets set for its home opener. With a home attendance surpassing 11,000 already expected to be on hand, Cincinnati heads in with some good vibes following a 2-1 road win against fellow expansion side Bethlehem Steel FC last week. Charlotte is also coming off a 2-1 victory as it rallied past the Harrisburg City Islanders in Charlotte, N.C.

- Colorado Springs Switchbacks FC hosts Arizona United SC on Saturday. The Switchbacks were idle in Week 2 and they look to follow up on their strong 2-1 season-opening victory against OKC Energy FC. Arizona is in the midst of a rigorous five-game road trip. So far United is 1-0-2 during this stretch, with a 2-0 win against Seattle Sounders FC 2 on March 30. The club is coming off a 1-0 loss to Sacramento Republic FC at Bonney Field last Saturday.