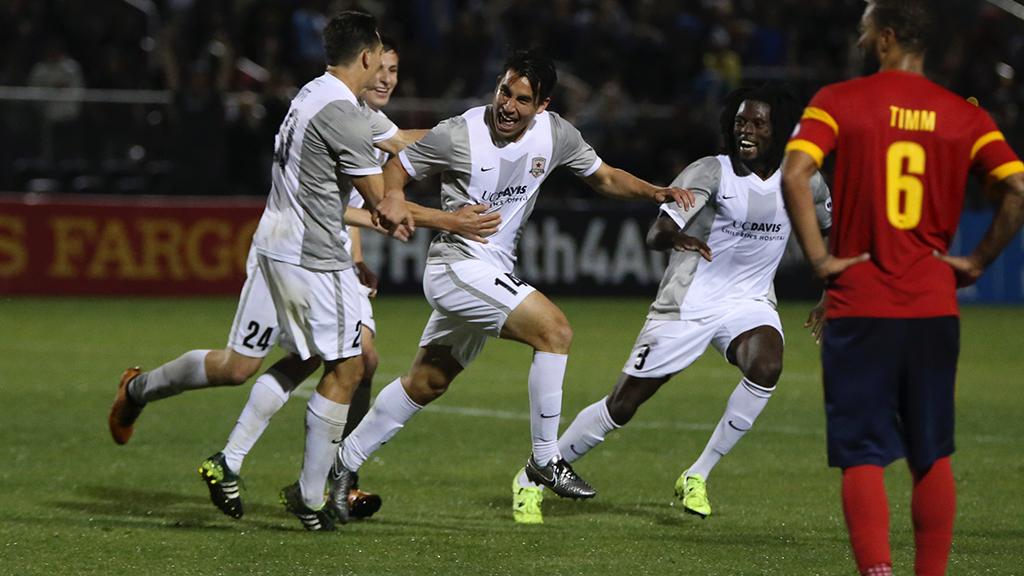 SACRAMENTO, Calif. – Given 10 minutes to make the difference as he came on as a substitute, Sacramento Republic FC’s Cameron Iwasa was ready, and eager to do just that.

“I was buzzing to get on the field,” Iwasa said. “As a sub you just want to come on and make something happen and fortunately I was able to do so. Ultimately it’s just a huge win. Three points is crucial.”

Iwasa’s low finish from outside the penalty area proved the difference for Republic FC on Saturday night in a 1-0 victory against a stubborn Arizona United SC at Bonney Field.

Scoring quickly after coming off the bench isn’t anything new for Iwasa. Last year the Sacramento native did just the same as Republic FC took victory in an international exhibition against the Barclays Premier League’s Sunderland AFC.

On Saturday night, it was a fine turn after he picked up possession from James Kiffe that created the opportunity. Having left his marker behind, Iwasa stepped into the open space and drove a low finish that found the back of the net, and sent the record Bonney Field crowd of 11,569 into massive celebration.

For Republic FC Coach Paul Buckle, the team’s discipline at both ends of the field was a pleasing aspect of the win. After conceding last season when the side pushed for a winner if a game was tied late, Republic FC’s defense remained strong as it pursued the winner that Iwasa eventually provided.

“The biggest thing for me didn’t get sloppy, we didn’t run out of shape,” Buckle said. “Before teams might’ve come through us but that’s not happening. If we hadn’t gotten the win we could’ve gotten the point, but in the end we were able to continue going right to the very end to get a win.”

After two goals were previously ruled out – a foul at a corner kick denying Mark Sherrod, and an offside flag doing the same to Emrah Klimenta – there certainly could have been some frustration set in for Sacramento.

Instead, Iwasa proved the hero as Republic FC opened its third season with back-to-back victories.

“Early in the season it’s good to set the tone and put pressure on other teams, keep making sure we’re getting home points,” Iwasa said. “We feel we’re good enough to win every match when we step on the field. It’s just about getting out there, executing it and making it happen.”