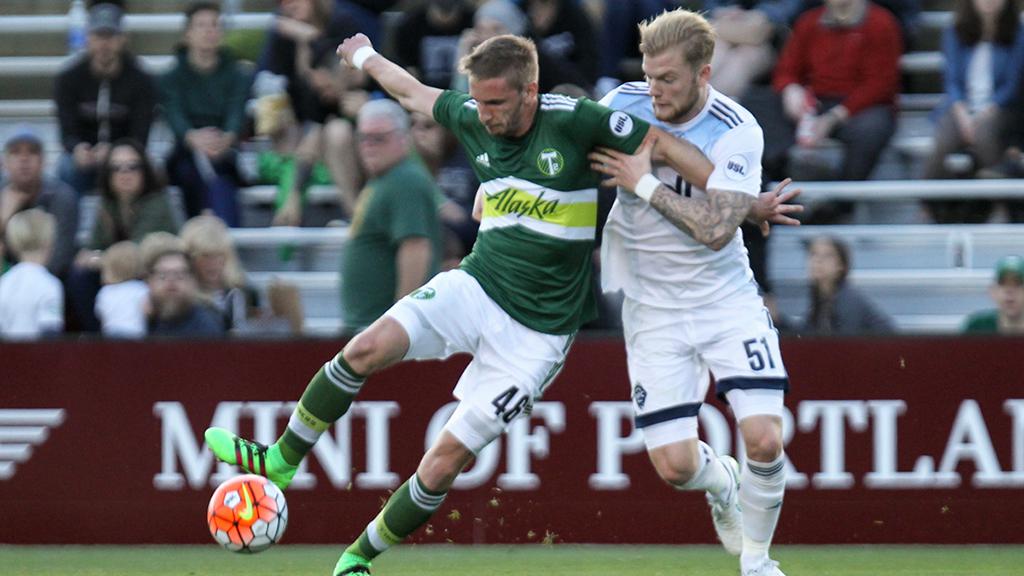 PORTLAND, Ore. – Daniel Haber scored a pair of second half goals as Vancouver Whitecaps FC 2 earned a 3-1 victory against the Portland Timbers 2 at Merlo Field on Saturday night. Kyle Greig also scored for WFC2 to help the side to its second win in as many games ahead of the club’s home opener next weekend.

WFC2 (2-0-0, 6pts) put on the early pressure, and almost took advantage of a goalkeeping mistake in the fourth minute only for Greig’s finish with the goalkeeper off his line to miss the target.

Portland goalkeeper Wade Hamilton more than made up for his mistakes soon after as he denied Haber with a fine save. Then, from the ensuing corner, Hamilton came up big again to turn away a header that was headed for the left corner.

T2’s first good chance came in the eighth minute, as Chris Klute got forward down the right and sent in a low cross, but Villyan Bijev’s shot went wide of the left post. Klute’s willingness to join the attack almost resulted in a fortuitous opening goal in the 18th minute when his cross deflected off Vancouver’s Matthew Baldisimo, and went fractionally wide of the post for almost an own goal.

Portland (0-2-0, 0pts) again went close as Dylan Damraoui cut in from the left to beat his defender, and then fired a shot to the far post that went just high and wide. Vancouver also had a good effort from distance by Alphonso Davies saved, as the 15-year-old Canadian U20 international looked to mark his USL debut with a goal.

Neco Brett was the next to have a go, as the Portland forward fired on goal from 20 yards on a shot that was comfortably saved with five minutes to go in the first half by WFC2 goalkeeper Spencer Richey, but the teams went to the break scoreless.

Vancouver was given the chance to take the lead from the penalty spot on the hour-mark when Brett Levis was brought down in the penalty area, and Greig made no mistake for his second goal in as many games to start the season. The WFC2 captain sent his show low into the right corner, sending Hamilton the wrong way.

A minute later WFC2 almost made it two as Davies was left all alone on the left side at the top of the penalty area, but Hamilton came quickly off his line to make a big save. Haber wouldn’t be denied in the 67th minute, however, as a deep cross by Levis was controlled by the forward in the right side of the penalty area, and Haber drove back across the penalty area to his left before burying a finish into the left corner.

Portland almost hit back immediately, as Brett rocked the crossbar with a free kick from 25 yards, but WFC2 made it three as Haber notched his second of the night in the 76th minute.

T2 substitute Victor Arboleda twice had chances to find the net for Portland, but each time he was denied by Spencer Richey to keep the hosts off the board. Damraoui pulled a goal back with 11 minutes to go for T2 as he broke into the left side of the penalty area and scored from a narrow angle at the near post, but was then sent off as T2 was reduced to 10 men six minutes later.

Vancouver threatened to add to its tally late on, but Haber’s first two goals of the season proved the difference as Coach Alan Koch’s side took its second road win of the season.

Daniel Haber, Vancouver Whitecaps FC 2: Haber not only scored twice, but showed his class with both finishes as he led WFC2 to a confident victory on the road against their Cascadia rival.