Strong start paved way to victory for United in Seattle 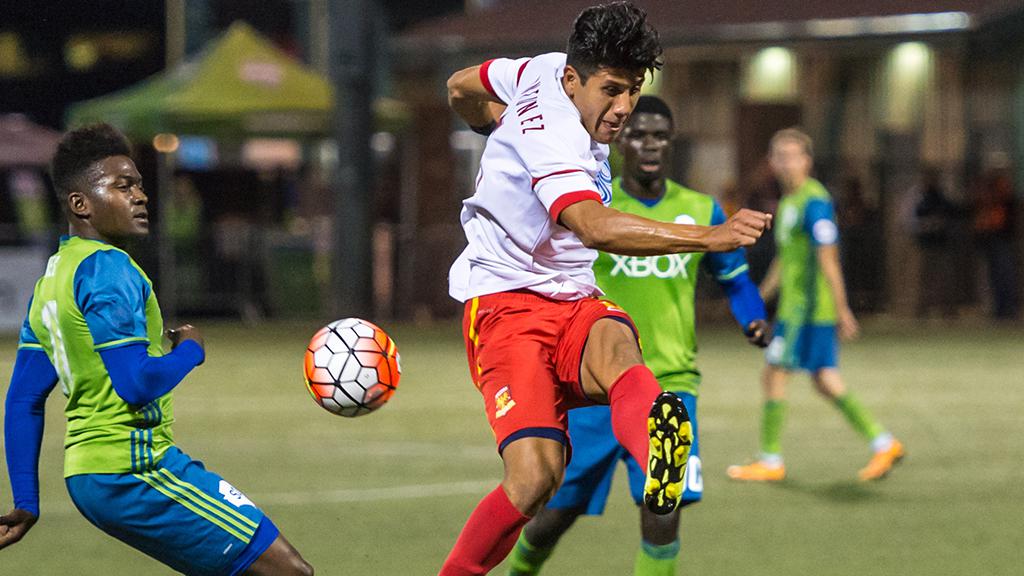 After a lackluster first half against the LA Galaxy II in his side’s first game of the season, Arizona United SC Coach Frank Yallop challenged his players to find a response.

After Wednesday night’s 2-0 victory against Seattle Sounders FC 2, the two-time MLS Coach of the Year was much happier with what he saw as he took his first win at the helm of the club.

“I thought from the second half of the LA game to the end of this match our demeanor was correct,” Yallop said. “My big thing was making sure that they knew that wasn’t acceptable, the first half in LA, and we played very well tonight. I thought defensively we were sound, I think offensively we created some great chances, all around it was a very good performance and a great win.”

Leading the way for United was forward Chris Cortez. An offseason addition from Orange County Blues FC, Cortez notched a goal and assist against Seattle as Arizona broke a four-game streak without a goal that dated back to last season.

The big forward showed off much of his skillset on the night, with an excellent cross that set up Gibson Bardsley to open the scoring, and a fine finish from Blair Gavin’s pass that doubled the lead midway through the first half. For Yallop, the performance was indicative of what he things Cortez can be capable of for United.

“Chris is always difficult to play against, and I think we kind isolated him a little bit in the first game,” Yallop said. “Tonight I thought was more of a Chris Cortez sort of performance. I see him as being versatile, I played him up front, he can play wide, he can play as a No. 10, he can play in a number of spots. It’s just good to have that type of player available to you, and I think Chris had a very good game tonight. He could have scored two or three, actually.”

Arizona continues its road trip on Saturday, when it visits Bonney Field for Sacramento Republic FC’s home opener. With another sellout expected, the game will pose a big early-season litmus test for United, and Yallop is looking for his team to maintain the approach it took in disarming Seattle early on.

“It’s up to us to forget about the crowd and just get on with our game,” Yallop said. “It’s not going to be easy, we’re coming off a travelling week, a midweek game, Sacramento have played last week in Seattle and gone back, trained and waited for us. I’m sure my guys will be ready to go and ready to test themselves against a good team that’s playing at home.”

After a big bounce-back performance that handed Seattle its second home defeat of the season, the foundation now appears to be coming together for Arizona to live up to the potential their squad appears to have.

“I’m proud of the guys, the way they haven’t buckled under, they’ve listened to the coaching,” Yallop said. “They’re a great bunch of kids, and they played really well tonight.”