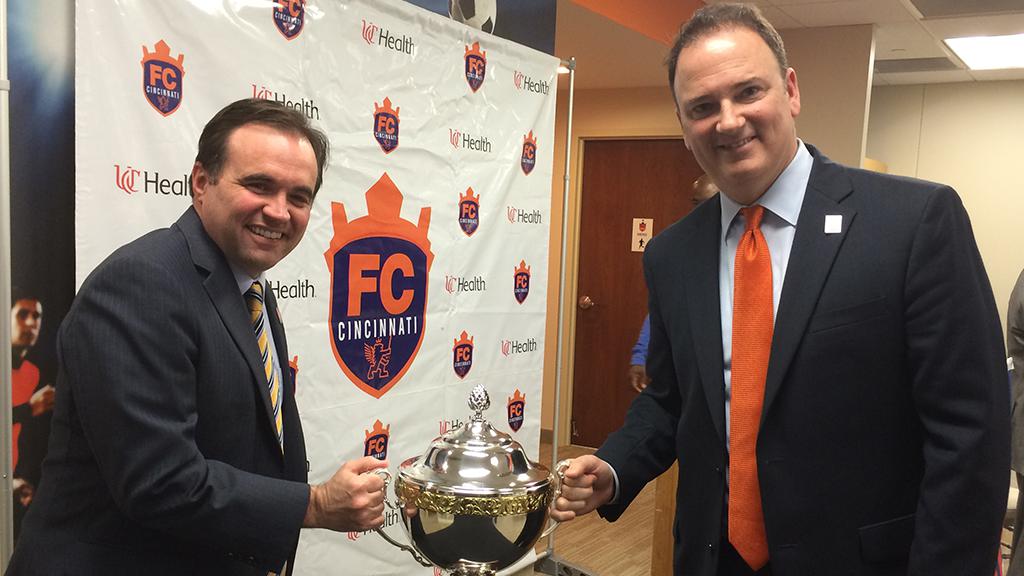 CINCINNATI – FC Cincinnati and the Charlotte Independence announced on Wednesday the creation of the Queen City Cup Challenge, with Cincinnati Mayor John Cranley and Charlotte Mayor Jennifer Roberts engaging in a friendly wager over the results of the contests between the clubs each season.

“This is exciting,” said Cranley as the trophy was unveiled at FC Cincinnati’s headquarters. “Soccer is the future of American sports and Cincinnati is going to be at the forefront. Not every city will have a professional soccer team and the fact that we have FC Cincinnati is huge. I want to thank Mayor Roberts for being such a good sport.”

FC Cincinnati will host the Independence in the club’s inaugural home opener on April 9 at the newly-renovated Nippert Stadium. The season series will conclude on May 21 at Ramblewood Stadium in Charlotte.

Scoring will be based off a standard 3-1-0 points system — 3 points for a win, 1 point for a draw and 0 points for a loss. In the event of a tie at the conclusion of the series, aggregate scoring will come into play with the team having scored the most goals winning the series. If both teams are tied on points and goals scored, the team with the most road goals will claim the Cup.

“We have been committed from the start to being another jewel in the crown of the Queen City,” said Jeff Berding, FC Cincinnati President and General Manager. “As Charlotte also refers to itself as the Queen City, creating the Queen City Cup Challenge with Independence President Jim McPhilliamy seemed a natural opportunity to spread the goodwill of soccer between our two cities.”