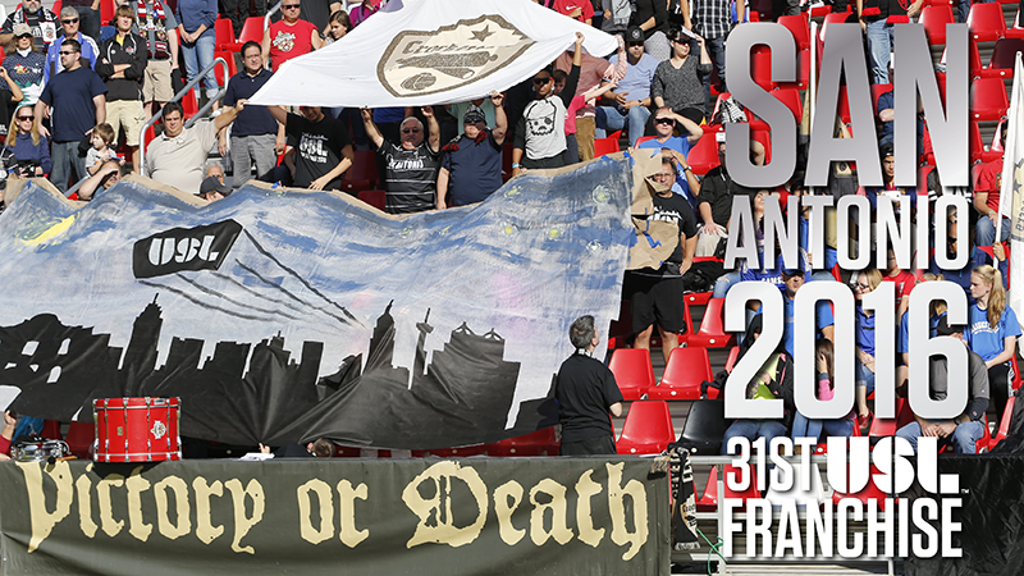 TAMPA, Fla. – The United Soccer League awarded its 31st franchise today to San Antonio, with the announcement that Spurs Sports & Entertainment will own and operate the club that will begin play in 2016.

The award is the culmination of long-term discussions between the league and SS&E to bring the USL to San Antonio. Led by Chairman and CEO Peter Holt, the NBA’s San Antonio Spurs are acknowledged as one of the finest organizations in North American sports. Since Holt’s addition to the organizations ownership group, Spurs Sports & Entertainment has expanded to include teams in the WNBA, the NBA D-League and the American Hockey League.

“It is with great excitement that the USL welcomes Spurs Sports & Entertainment, one of the most admired organizations in the sports industry to our league,” USL CEO Alec Papadakis said. “The USL is confident the experience this prestigious organization brings, in addition to a state-of-the-art soccer specific stadium and a passionate fan base, this new club will make a major statement both on and off the field in our league.”

SS&E is the second NBA ownership group to be awarded a USL franchise, following the award of a new franchise for the 2017 season in Reno, Nev. to Indiana Pacers owner Herb Simon. The addition of SS&E also continues the USL’s model of exceptional local ownership groups being at the core of the league’s expansion plans.

During the past 20 years of SS&E’s ownership of the Spurs, the team has claimed the NBA championship five times, while also reaching the NBA Playoffs every year since the 1996-97 season. The organization recently earned the No.1 position in ESPN the Magazine’s Ultimate Standings for a second consecutive year as the team’s combination of excellent play on the court, coaching, fan relations and ownership shone through, and each earned the top position in their respective categories.

SS&E has also operated successful franchises in the WNBA, the NBA D-League and the AHL. The San Antonio Stars reached the WNBA’s Western Conference Finals in 2014, while the Austin Spurs finished first in the NBA D-League’s Southwestern Division in the 2014-15 season. The San Antonio Rampage – who hold a partnership with the Colorado Avalanche – also finished first in the AHL’s Pacific Division in the 2014-15 season.

“We are very excited to bring a USL franchise to San Antonio, which has shown a desire and passion for the game of soccer to succeed here,” said Rick Pych, Spurs Sports & Entertainment President of Business Operations. “None of this would be possible without the incredible support from both the City of San Antonio and Bexar County, and we will continue to work together towards our shared goal of growing soccer in this community. We are excited to begin our relationship with the USL and start taking the steps towards bringing the highest level of soccer to San Antonio.”

The SS&E-owned USL franchise will play at Toyota Field, which opened in April of 2013. The 8,500 capacity facility was acquired by the City of San Antonio and Bexar County in a joint purchase in 2015.

Details on the club name, badge and color scheme will be announced in the coming weeks. For more information, visit USLSanAntonio.com, @USLSanAntonio on twitter andwww.facebook.com/USLSanAntonio.

The USL is a vital part of the growth of soccer in North America, on and off the field. With 24 clubs in the 2015 season, the USL looks to expand strategically with strong ownership groups that share the league’s passion and vision, in markets that are positioned for long-term success. The USL has previously announced the addition of clubs in the Rio Grande Valley, Cincinnati, Lehigh Valley, Orlando and Kansas City for the 2016 season, and Reno for the 2017 season.