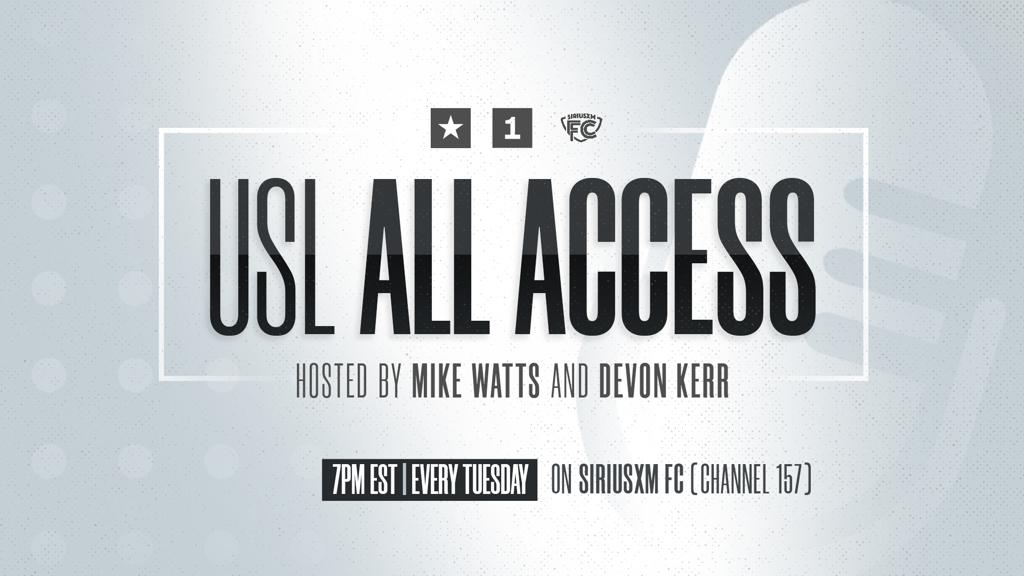 TAMPA, Fla. – The second season of USL All-Access on SiriusXM FC (Ch. 157) will premiere on Tuesday, March 8 as the countdown to the 2022 USL Championship season continues with hosts Mike Watts and Devon Kerr. The weekly show will air each week at 7 p.m. ET on Tuesday nights as the voices of the USL on ESPN bring their insights and guests from around the USL to a national audience on North America’s premier satellite radio network.

The play-by-play voice of the USL Championship since the 2015 USL Championship Final, Watts brings a wealth of knowledge and experience to the airwaves. In addition to his broadcast work in the USL Championship, Watts is coming off a 2021 in which he called eight domestic and international finals, including the U.S. Men's National Team's triumphs in the 2021 Concacaf Nations League and the 2021 Concacaf Gold Cup. Watts has led coverage of Concacaf's most prominent club and national competitions since 2016, including calling the 2020 Scotiabank Concacaf Champions League Final on Fox Sports. In addition, Watts also works on ESPN's soccer portfolio, Cincinnati Bengals television broadcasts, Westwood One's College Football Game of the Week, and is a public address announcer at Madison Square Garden.

The USL Championship’s lead analyst since 2018, Kerr has also served as lead analyst for the NCAA Men’s College Cup, and as an analyst for Concacaf events such as FIFA World Cup Qualifying and the Scotiabank Concacaf Champions League. In 2019, Kerr was the only individual to provide analysis of each round of the Lamar Hunt U.S. Open Cup, including at field level for the final from Mercedes-Benz Stadium. Kerr also appears on ESPN, NCAA, EA Sports and MLS platforms. He played collegiately at Stetson University and competed in the Germany’s Regionalliga with Altona 93.

The USL Championship and SiriusXM FC (Ch. 157) have also announced the first set of games that will air on the network to start the 2022 season, beginning with the clash between New Mexico United and Las Vegas Lights FC on Sunday, March 13 at 7 p.m. ET to conclude the opening weekend of the regular season.

Additional games to be broadcast on SiriusXM FC will be announced over the course of the season.