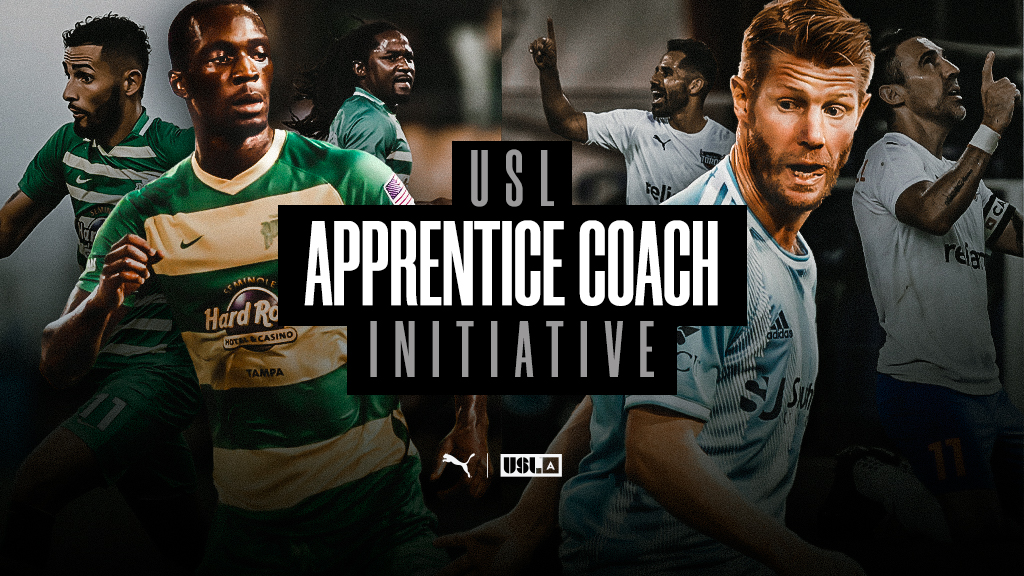 For past players in the USL Championship and USL League One, the path to remain in the game has often meant a move into the coaching ranks. Looking across the current landscape, you can see the likes of Sacramento Republic FC’s Mark Briggs, New Mexico United’s Troy Lesesne, the Charleston Battery’s Mike Anhaeuser and Austin Bold FC’s Ryan Thompson - all of whom played in the USL professionally - leading their teams in the Championship, with numerous other assistants across the league honing their craft in the professional ranks as well.

Others are set to join them in the future, with the United States Soccer Federation (USSF) providing current players in the USL Championship and League One the opportunity to earn their B Coaching License, and the ability to coach youth teams included in their club’s professional pathway. With the expansion of USL Academy, at least half a dozen current players are now getting the ample experience required to receive the license while helping guide the next generation of players.

The USL’s Apprentice Coaching Initiative provides a unique pathway for veteran players to naturally transition to a coaching role and helps better connect their youth-to-pro pathway. The apprentice coaches receive vital, real-world experience to prepare them for their next step after playing while giving Academy players the opportunity to learn from current team leaders.

Currently, there are players from three teams within the USL system working with the Academy teams to earn their B License. Yann Ekra, Leo Fernandes, and Lucky Mkosana at the Tampa Bay Rowdies are in the program, as are Rio Grande Valley FC’s Rodrigo Lopez and Vincente Sanchez, while further west in Texas, Richie Ryan is working on his license with El Paso Locomotive FC. 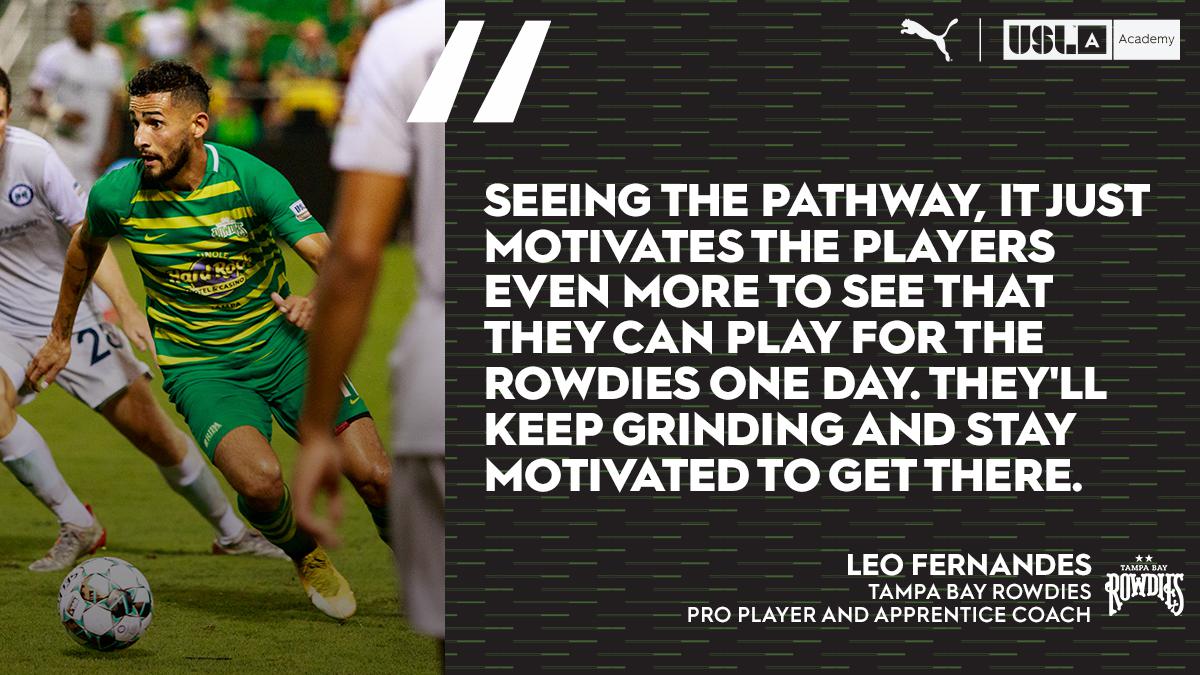 The Rowdies have a strong history of assisting their players on their transition from playing to coaching. Head Coach Neill Collins made a straight transition from player to coach in the middle of the 2018 season after earning his UEFA ‘A’ coaching license while still a player.

“Having the license gave me the opportunity to take the Head Coach’s role and move from player to coach overnight, but it is the day-to-day experience of carrying out the role that has helped me develop my coaching skills,” said Collins, who recently passed 100 games in charge of the Rowdies in all competitions on the sideline. “Whether it is kids just starting, High School, or professionals, the only way to really improve is to put your ideas and principles to practice. Anyone that is willing to get their hands dirty will be better for it in the long run.”

Rowdies club legend Keith Savage was appointed Head Coach of the USL Academy team before the season kicked off. He received his license while playing for Tampa Bay and created his own youth program before moving into his current role.

“I love that the Rowdies are now building this USL Academy so that their current players will have an opportunity to continue their careers with the Rowdies once they stop playing,” said Savage. “I'm excited to get it started. I'm excited to lead it. I'm excited to mentor some of those players. Their goal is to have players, who eventually want to coach, be involved with the USL Academy.”

For Fernandes, who recently joined Savage in reaching 100 appearances in the Rowdies’ colors, coaching is a way to connect with his father, who was his first coach. He is taking the opportunity to continue his love of the game once he’s done playing, but from a different point of view. As someone who has been part of the Rowdies organization since signing ahead of the 2017 season, he is happy to work with the future of the team.

“[My dad] showed me the passion and what it takes to be a soccer player,” said Fernandes. “If I can do that for the young players and show them my passion, how much I love the game and teach them the right way to play the game, it's something I want to get into.”

With more than 200 appearances in the Championship for his career, Ekra is another Rowdies player taking the next step toward his future. As someone who always wanted to stay involved in the game he grew up with, it was an easy decision for him to get his coaching license when USL presented him with the opportunity. Ekra tries to inspire his young players and engender a sense of enjoyment when they’re on the field.

“My goal is to make them like the game,” said Ekra. “They have to realize it's fun, it's fun to play and they have to be passionate about it. Enjoy and just play. That’s how they can get better.”

As someone who loves the Rowdies organization and the game, with over 200 caps across the many American soccer leagues, Mkosana was excited to be able to continue that love once his playing career is over. For him, coaching is a way to learn something new both on and off the pitch.

“I would say for me, on the field and off the field, you can see some of the things that [the coaches] emphasize, some of the principles they wanted to follow and their goals,” said the Zimbabwe native. “I’m now more attentive to them, because you're paying attention for the long-term career that you are going to have. I also tend to see all decisions that could work while analyzing the game, it’s pretty cool.” 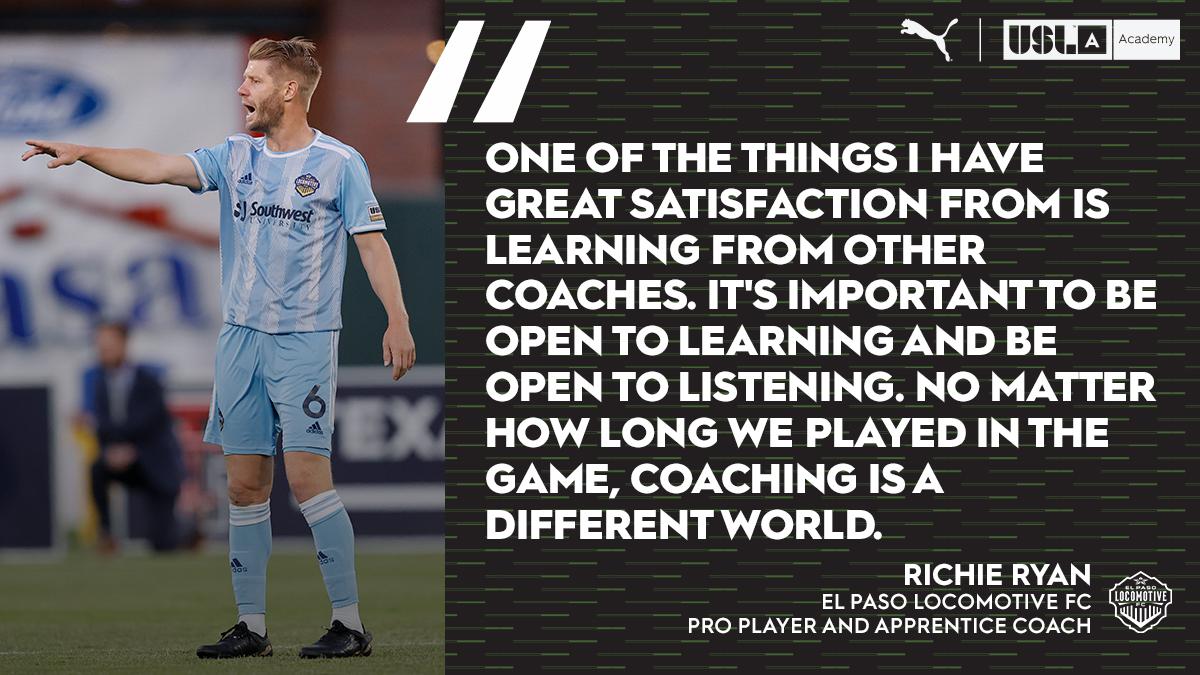 For Ryan, who has become a widely admired player in the United States after his experiences playing in his native Ireland to the Premier League and now in the USL Championship, the transition has been a natural one. The veteran midfielder, who has been with Locomotive FC since the club’s inaugural season in 2019, has seen growth on the academy side both in the big picture and in individual development for a talent-rich region that players like United States international Ricardo Pepi hail from.

“El Paso gives us the opportunity to put time back into trying to develop the younger generation,” said Ryan. “I think especially for those in El Paso, which is a new academy, and a pretty unique situation here too, it's an inflow of passers-by far away from everywhere. We now have an opportunity to try to build a pathway for [the kids] to get into the First Team.”

Over in South Texas, the same applies in terms of the talent base, and with the knowledge, Rodrigo Lopez and Vincente Sanchez bring to Rio Grande Valley FC from their time competing in the top flight in Mexico and the United States, they are helping develop the Toros’ Academy side as they participate in the inaugural Academy League season. Lopez was a young pro himself, signing his first professional contract at 18 years old. He played in almost all levels of American soccer, from MLS to USL League Two where he was able to grow and develop as a young pro. His career experience was what pushed him to pursue coaching.

“I've had a long career and it’s come with a lot of different coaches that I've had [in the United States] and in Mexico,” said Lopez. “I feel like with my experience with the years I've had in this game, I feel like I’d be a good coach and hopefully translate my experience on to the youth and to the future of the sport in this country.”

Previously, USL and USSF have provided pros the opportunity to work for their C Coaching License while playing. There have been many former and current players who have taken advantage of the chance to get those licenses and apply them at the Academy level. Some of those players include Luke Spencer, who was a player-coach in 2018 and now Assistant Boys Academy Director at Louisville City FC, Marcos Ugarte, current midfielder and USL Academy Head Coach at Birmingham Legion FC, and Zach Prince who played with New Mexico United before taking the role as Director of High Performance Youth Programming.

“Credit goes to the league and the clubs within the league for trusting young coaches and offering a chance for young players to get their opportunity within professional soccer,” said Ryan.

Sooner rather than later, it could be Ryan, Mkosana, or Lopez leading teams from the sidelines, just as their predecessors on the field do now.