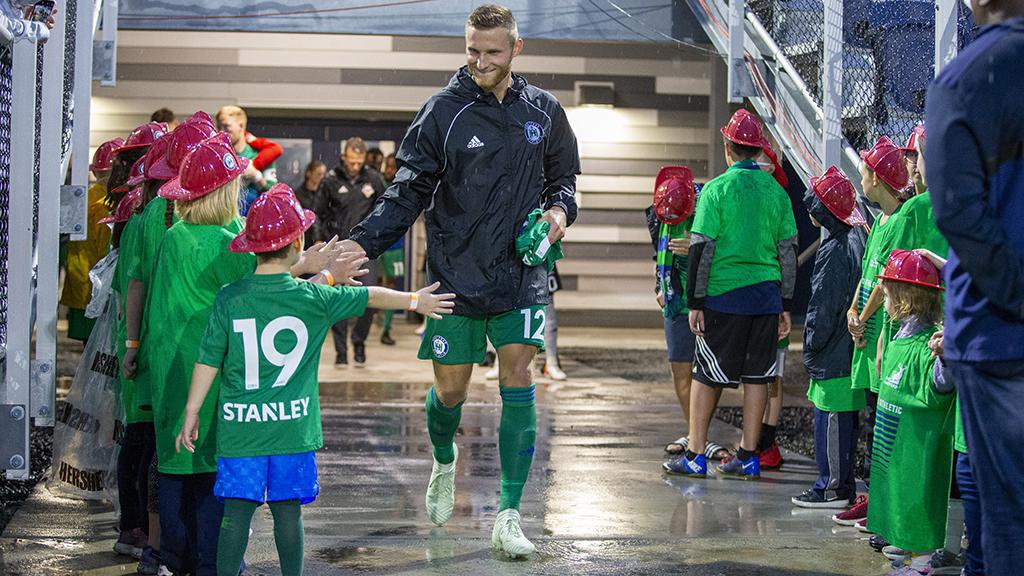 HARTFORD, Conn. – On Wednesday night, Hartford Athletic will welcome Miami FC to Dillon Stadium for what’s set to be a key game in the USL Championship’s Atlantic Division.

Before the game kicks off, though, the club will be hosting a special pregame event in collaboration with club Founding Partner The Hartford, welcoming the company’s Junior Fire Marshal Program and its presenters to provide fire safety education to a collection of local children on the Dillon Stadium field.

It will be the second such event in the club’s short history, and after the past 18 months of the program being almost exclusively run in the virtual realm it’s an event that Jeff Welch, The Hartford’s Assistant Director of Media, Public, and Community Relations is looking forward to being hosted in person.

“We did the event in 2019,” said Welch last week. “The fire chief from Hartford will be in attendance, and I think we’ll have 15-to-20 children of The Hartford employees that will be on the field with him and reciting the Junior Fire Marshal Pledge with all the children in the stadium. For me, managing the program, it’s a great way to see the program to life, especially because this will be the first time in about a year-and-a-half that we’ve been around the kids wearing their Junior Fire Marshal helmets and taking interest in the program and fire safety.”

The Hartford established its Junior Fire Marshal Program in 1947 and will celebrate its 75th anniversary next year. Aimed at elementary school classes from Kindergarten to Third Grade, the program has reached more than 111 million children over its history as the insurance company has aimed to reduce the information gap in the causes of fires around the homes. The Junior Fire Marshal Program was for most of its history conducted in person, bringing classrooms together for presentations by educators and local fire fighters that would not only help the youngsters learn about being fire safe, but also at times pass that information on to their families as well.

“By educating students to be more fire safe and to grow up fire safe, it helps, but in addition to that they’re also carrying messages home that they’re learning at school in a classroom setting,” said Welch. “It seems fairly basic, but families are engaging in those practices. For example, one of the things we talk about is having your outside meeting place established at home, and what that is is everyone at home knowing in the event of a fire – which is often a chaotic experience – everyone knows where to go so you know everyone’s accounted for, so when the fire department gets there, you’re able to tell them if there’s someone still in the house.

“Not a lot of families have that meeting place established outside their home or have their escape plan and knowing two ways out of every room, a lot of them don’t have that, so we encourage children and ultimately their families to sit down and have conversations and come up with escape plans so that everyone is on board, and not just establish that plan but practice it twice a year.” 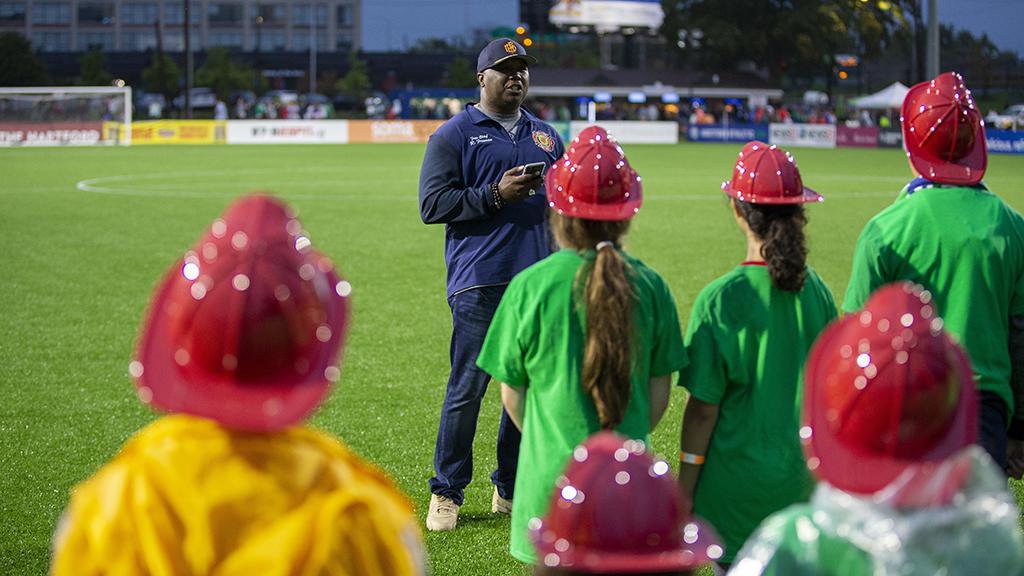 Hartford Athletic hosted The Hartford and its Junior Fire Marshal Program in 2019 for an on-field presentation from a local fire fighter educating young children on how to be fire safe around the home. | Photo courtesy Hartford Athletic

The past year – with virtual learning and classrooms as a result of the COVID-19 pandemic – has obviously made the in-person teaching The Hartford has aimed primarily at the 150 cities cited in the Hartford Home Fire Index. The virtual realm has opened up new avenues for the program, though, with the company taking the program online at www.juniorfiremarshal.com and providing digital access to presentations and education materials.

The expansion of the group’s online programming allowed The Hartford to reach students in more than 650 cities and towns around the United States in the past year, while the group also hosted 50,000 students for its first National Junior Fire Marshals Day, a virtual live event where teachers could register their classrooms for an online presentation from educators and fire fighters. The Hartford is now planning its second edition of the event, scheduled for Tuesday, October 5 to coincide with National Fire Safety Week between October 3-9, while the company has also distributed $1.5 million in grants across the country to help further fire safety education efforts at local fire stations and schools.

As impressive as the program’s reach now is, though, there’s still something to be said for the in-person instruction and interaction that events like the one at Dillon Stadium can provide. With his daughter a big soccer fan, Welch has also enjoyed what the Athletic have brought to Hartford since their arrival two years ago, giving the city an enhanced sporting identity and a high-level club that has embedded itself into the community through events such as this Wednesday’s.

“I think it’s the access, obviously it’s the quality of play but being so close to the action, getting to know and recognize the players, it’s a community feel,” said Welch. “The fact that it is our own soccer club, this part of the country is a hub for soccer – in New England we love our soccer, and we haven’t had it other than watching the University of Connecticut soccer, which we’ve also done. I think having that with all the young kids here that are so into soccer, having this team and these players that they can lean into and look up to has been a big benefit.

“The atmosphere and the fans there are great, it’s a rabid cheering section, which is fun.”