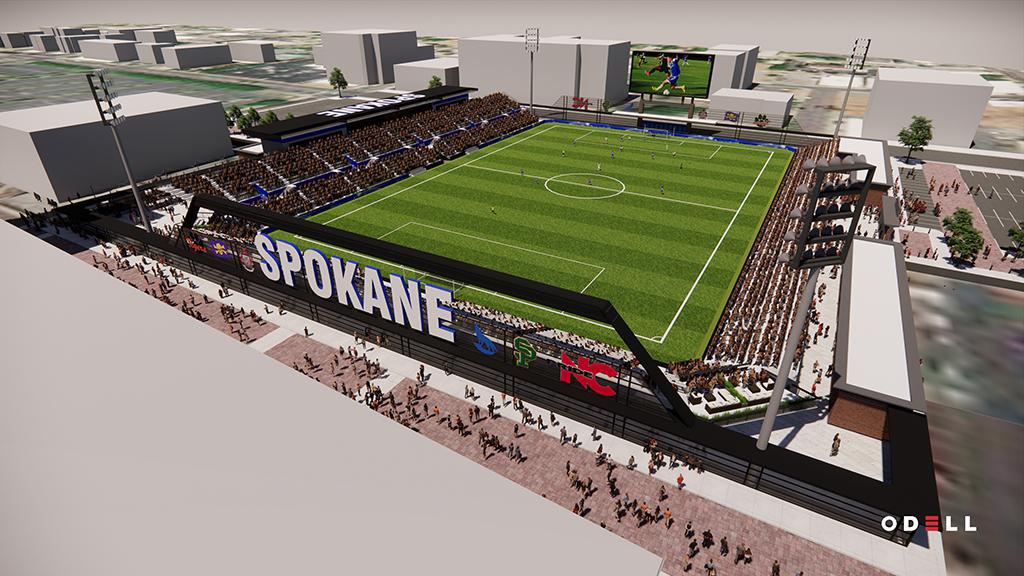 A partnership proposal by Downtown Spokane Partnership and the United Soccer League would see major renovations made to Joe Albi Stadium in Spokane, Wash. and the arrival of a USL League One team to the city.

SPOKANE, Wash. – A new partnership proposal presented on Tuesday by Downtown Spokane Partnership and the United Soccer League has leaders in Spokane revisiting the possibility of a new 5,000-seat stadium in downtown Spokane that would become the home of a USL League One club.

“Spokane has a rich tradition of sports, great fans and athletic talent,” said USL COO and Chief Real Estate Officer Justin Papadakis. “We have been working to make the dream of having a professional soccer team a reality for the past few years and this partnership proposal is one we think the community will strongly support.”

The partnership proposal centers around a prior decision to renovate Joe Albi Stadium, located in the northwest part of the city close to the Spokane River. Under this new proposal, the city would save $17.5 million in operations and maintenance expenses by entering into a formal partnership agreement for a newly built downtown stadium.

“This is a smart investment. It not only provides the district with cost savings, it makes a greater economic impact, leverages tax-payer dollars, supports local business and creates jobs,” says Mark Richard, President of the Downtown Spokane Partnership.

“This kind of economic opportunity means even more now than it did a few years ago as Spokane works to recover from the economic recession brought on by the COVID-19 pandemic,” added Richard. “Our community and our local businesses would benefit greatly from this opportunity.”

Should the proposal be accepted, it would continue the current trend that has seen new soccer-specific stadiums provide top-class matchday environments for fans across USL League One and the USL Championship. Last year, League One club Chattanooga Red Wolves SC opened its permanent home at CHI Memorial Stadium and this offseason began further development of the mixed-use project, including construction of new housing, retail and entertainment around the venue. Construction is currently in progress at the new home of South Georgia Tormenta FC, part of a project that will also feature housing and new community amenities scheduled to open for the 2022 season.

In the Championship, the past year saw the opening of Louisville City FC’s new 15,000-capacity Lynn Family Stadium. Three new venues are set to open this year, including the arrival of the Charlotte Independence at a renovated 10,000-capacity Memorial Stadium that underwent a $40 million modernization for year-round use in the community.

A new club in Monterey Bay, California has entered a partnership that will see it join the Championship in 2022 at historic Freeman Stadium following a privately funded multi-million-dollar renovation in the coming year, while the past month saw financing approved for a $284 million development in Pawtucket, Rhode Island anchored by a 7,500-seat soccer-specific stadium that would open for the 2023 season.

Another major development is currently being planned in Des Moines, Iowa where a professional soccer stadium would anchor a 65-Acre, $535 Million development through a partnership between Krause+, the real estate development arm of Krause Group, and the City of Des Moines that would drive revitalization in the city’s downtown area.

In addition, other new venues are currently in the planning stage such as a Stadium & Cultural Center in Albuquerque, New Mexico that would become home to New Mexico United. OKC Energy FC is also set to develop a new home venue in the coming years as part of the city’s MAPS4 initiative, which was approved in December 2019.

In Spokane, the home stadium would not only serve as the host for professional soccer but would also be available to host concerts, large-scale special events and other sporting events, creating significant economic impact by drawing tourism, supporting our local businesses, and creating jobs.  Maximizing the use of this public asset and attracting a professional soccer team only occur in a central urban location.

This partnership proposal guarantees SPS could use the stadium for all high school football and soccer games as well as any other school district events at no cost – with free parking for all school events. Additionally, the central location will be a more equitable solution for students and families by creating greater access for all five high schools, with many public transportation options and even being within walking distance for some.

“We’re excited for what this new proposal would mean for our community – it’s a win-win-win for students and families, residents, local business, the PFD and sports fans,” said Richard.

DSP plans to submit its proposal to the Public Facilities District board and Spokane Public Schools board for review in the coming weeks.