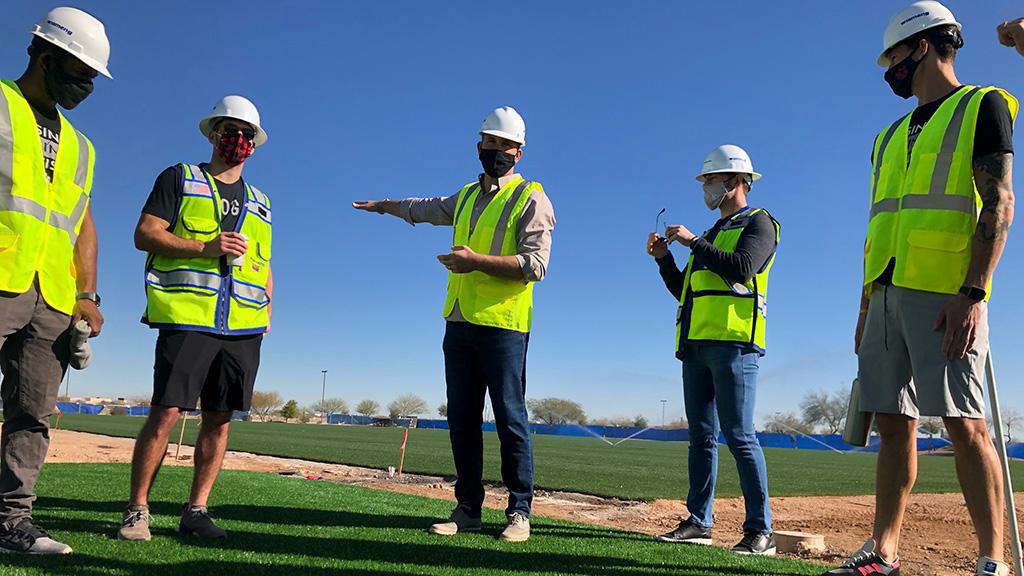 Construction of Phoenix Rising FC's new stadium at Wild Horse Pass is well underway, with the new 10,000-seat venue set to be complete prior to the start of the 2021 USL Championship season. | Photo courtesy Phoenix Rising FC

PHOENIX – In the 53-day span between the groundbreaking and its official opening on March 25, 2017, the creation of Phoenix Rising FC’s former home at the Salt River Pima–Maricopa Indian Community took on somewhat mythic status.

“Man, there’s so many great memories that we’ve had there,” said Rising FC General Manager Bobby Dulle recently. “It was just such an organic feeling, the fact that it was soccer-specific, the fact that it did come together so quickly. I’ll never forget that first match, crawling under the bleachers and running extension cord, checking the power and making sure we were ready to go for that evening’s match.”

There’s another big build on for Rising FC this offseason, too, but this time around the club has a bit more leeway on the schedule. Announced in December, the club’s new home at Wild Horse Pass in the Gila River Indian Community has already made remarkable progress. Natural turf fields have been installed to provide extended time to bed in, and around them new stands and features are going into place which will make the almost 10,000-capacity venue a grand home for the defending USL Championship Western Conference Title holders.

According to Dulle, discussions on the move had been underway for about a year with local leadership. The expanded space and potential for additional training fields and facilities for the club’s First Team and Academy coupled with the ability to raise capacity and offer new amenities to the club’s passionate fanbase made it a move that made sense on every level. 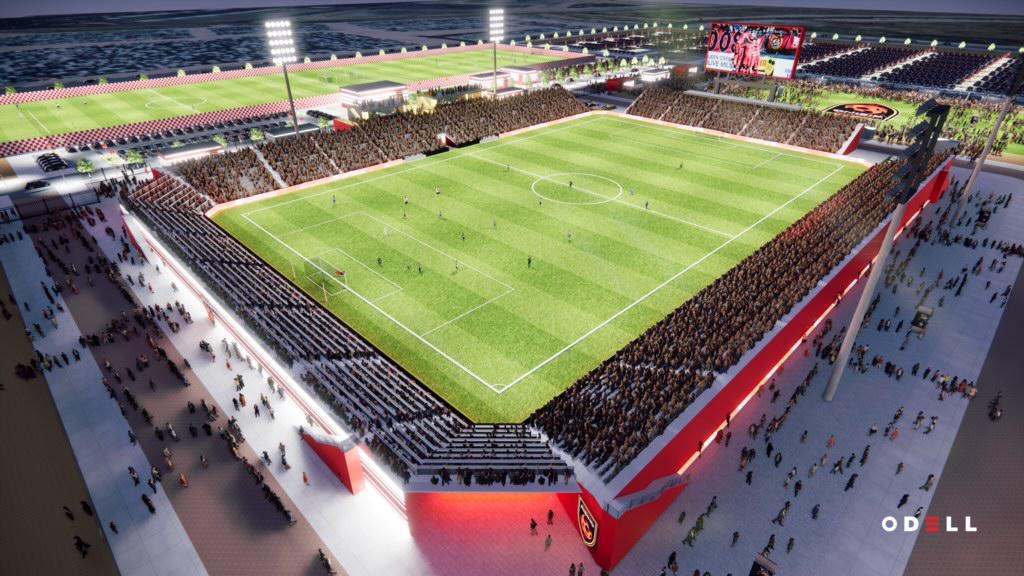 Renderings of Phoenix Rising FC's new home at Wild Horse Pass in the Gila River Indian Community, construction of which is currently ongoing.

“Every decision that we’ve been making and looking at has been around the fan experience,” said Dulle. “We’re very excited about the opportunity and have some of the infrastructure already in place already that allowed us to check some of the boxes on our short-term goals. More roads in and out of the facility, which allows us to have larger parking lots, which ultimately allows us to increase our capacity and create a better fan experience with some of the amenities.

“We have a little more time this time around but we’re moving very quickly, from everything you’re seeing on the fly-bys, we’re going to be ready to go when the season kicks back off, but I’m very pleased with the progress and the pace. I’m out there on almost a daily basis and to see it moving and the changes happening overnight, it’s very exciting for our club and our community.”

If there has been a mindset at Rising FC over the four seasons since it took on its current form, it has been that of constant evolution and progression. Since Phoenix was relaunched ahead of the 2017 season following its purchase by a large ownership group led by Governor Berke Bakay, each year the aim has been for the club to be bigger and better than it was the season that preceded it.

It’s inarguable Rising FC has succeeded in its aim. Before, the club had yet to reach the USL Championship Playoffs. Now, it has claimed three pieces of silverware and holds the top spot in numerous categories in the Championship’s Single-Season Record Book. In 2021, Head Coach Rick Schantz’s side will again be considered one of the major contenders for the league title. But beyond the investment that brought success on the field, the club’s new brand and home venue also sparked a fanbase that made Casino Arizona Field not just a place that would challenge any visiting side, but a raucous celebration every game night.

That helped Rising FC become a team that in a city with all four major sports leagues represented – say nothing of annual stops on the PGA Tour, NASCAR circuit and all the rest the city and broader region has to offer – could not only hold its own but carve out a strong position with local sponsors and fans, bringing consistent off the field success as well. 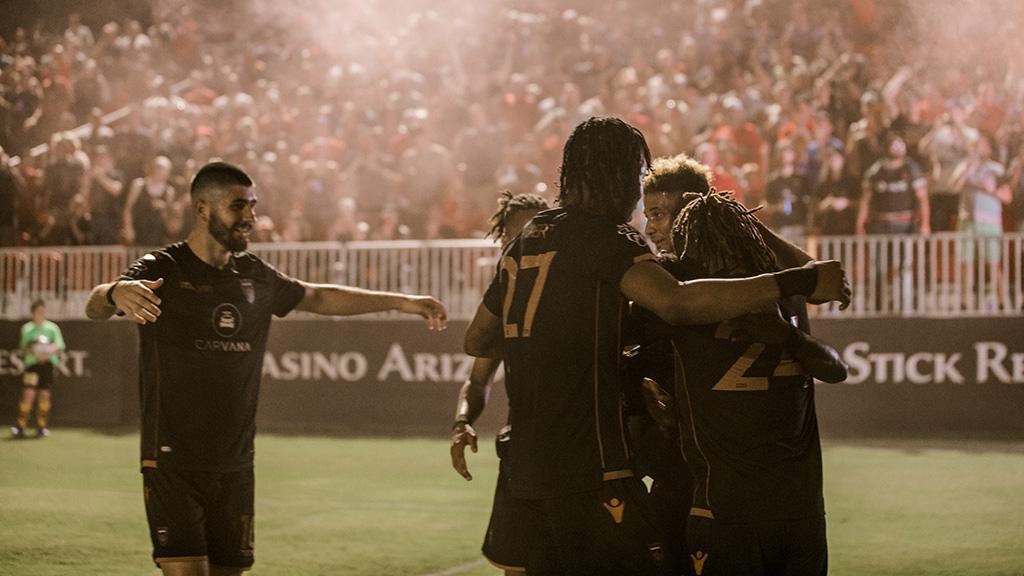 Phoenix Rising FC's home at Casino Arizona Field had one of the most raucous atmospheres in the Championship, something the club is aiming to expand as it moves to its new home. | File photo courtesy Phoenix Rising FC

Of course, it helps if your brand is also associated with one of the legendary names in the game in Didier Drogba. Easily the biggest signing in the Championship’s history, Drogba’s arrival made a massive impact in Rising FC’s inaugural season at the box office and put the club on the map globally. And while Drogba might not be doing his thing on the field anymore, he remains active within the club and its decision-making processes.

“He sat in the board room every week with a pen and paper and took notes and then provided his insights,” said Dulle. “What Didier did for our organization is second-to-none and we’ll forever be grateful for that, and he’s still a huge help to us all the time on a lot of decisions that we’re making.”

The evolution of Rising FC has also been part of the broader evolution in the Championship. The arrivals of not only new clubs, but new venues and ownership groups across the league have changed the landscape, and even seen some look to emulate the transformation that Phoenix pulled off four years ago. The success in 2020 of a rebranded and retooled FC Tulsa side backed by its own strong local ownership group was in some ways reminiscent of what had previously happened in Phoenix.

For Dulle, the way the league has progressed has been exciting to see, even as it has pushed Phoenix harder to remain ahead of the pack.

“I’m very excited about what has transpired the last couple of years and the growth of the USL,” said Dulle. “There are so many good people that are joining the league and the level of play has increased greatly, and of course the pedigree of some of the new ownership groups and leadership across the league, it’s really exciting. We’re fortunate to be part of a league that continues to grow and evolve.” 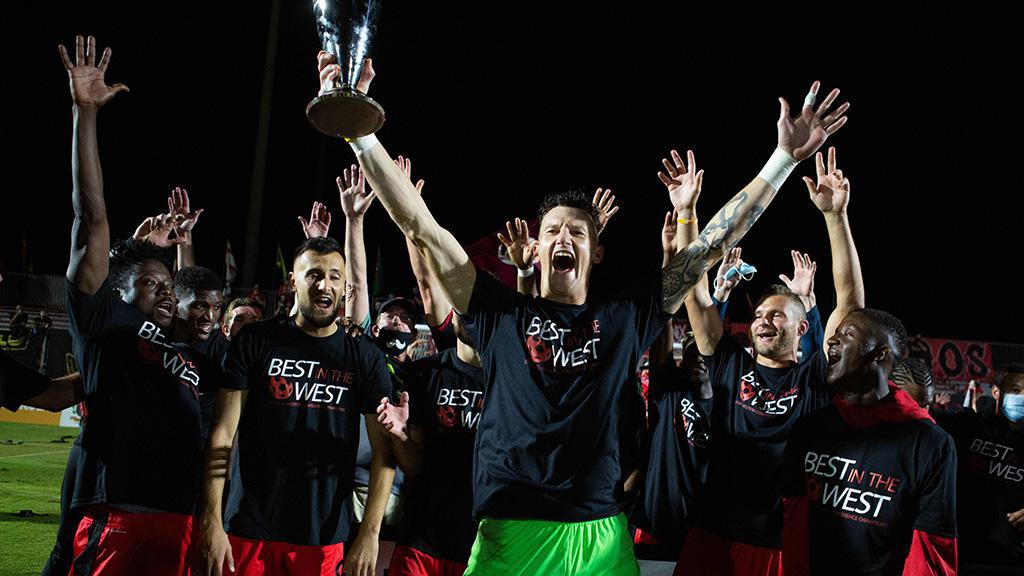 With less than three months to go until the expected start of the 2021 Championship season, preparations for Rising FC’s Western Conference title defense are well underway. There are the new additions led by Aodhann Quinn and the returnees such as two-time Championship MVP Solomon Asante, and things appear to be pointed in the right direction once again as Phoenix looks to continue its high-octane, attacking brand of soccer for another season.

How many fans might be in attendance when the club’s new home opens? Well, that’s still to be determined. If there’s one night this season that Dulle is going to be looking forward to most, though – beyond a potential USL Championship Final in November – it’s the night the club gets to welcome its first official sellout crowd at its new home, bringing the community that has made the club special back together for the first time.

“Oh my gosh, it’s giving me chills,” he said. “It’s going to be exciting to have 10,000 people gathering together. It’s going to be kinda like that first match when we weren’t quite sure what to expect, but now we had a little experience I think everyone is going to be so happy to be together. Our fans, they become family and gather around their own and get together, and this is what brings them together. Whether it’s mom and dad with their kids, or intergenerational with grandparents, or friends drinking beers and coming to the match, it brings people together.

“This is going to become a part of their lives. They’re a part of our lives and we’re just one big family, one big celebration and hopefully we can take that all the way to the Final.”