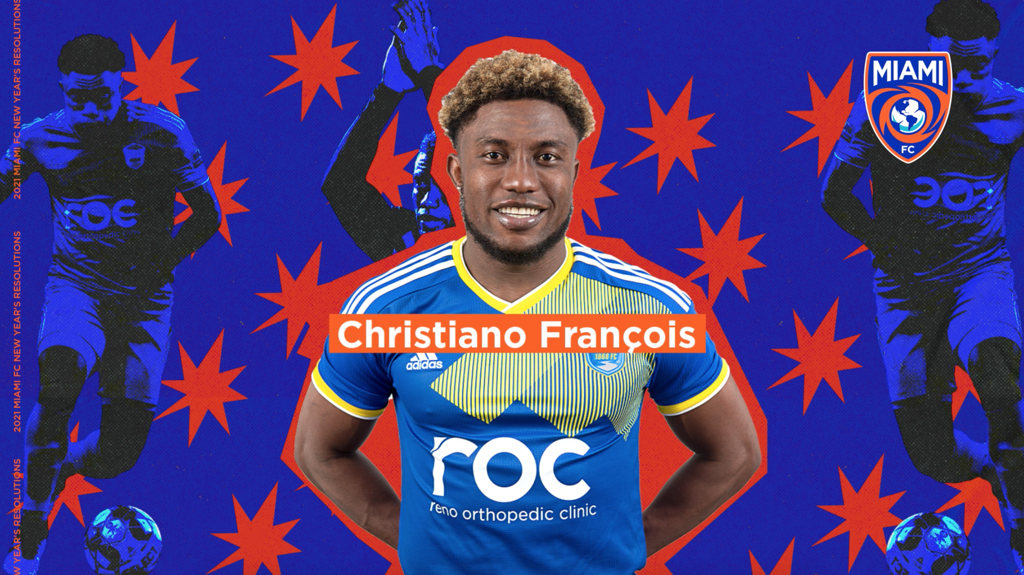 MIAMI (January 18, 2021) – The Miami FC’s attack became much more dangerous this Monday, with the club announcing the signing of winger Christiano François, pending league and federation approval. The Haitian attacker joins Miami after an extremely successful 2020 USL Championship Season with Reno 1868 FC, which earned him a spot in the All-League Second Team.

“Christiano is one of the most exciting attacking players to watch in the USL Championship,” commented Technical Director and Head Coach Paul Dalglish. “He has breathtaking pace and is a brilliant dribbler and over the last two seasons has started to play a little more inside, adding more goals and assists to his game. Most importantly when I spoke with him, I heard the motivation in his voice to bring success to Miami. We are excited so see him in the Orange and Blue.”

Born in Cabaret, Haiti, François has enjoyed an extremely successful USL Championship career playing in 104 matches while scoring 20 goals and adding 28 assists to his name. In 2020, François was a focal point in Reno’s attack, scoring six goals and adding seven assists in the regular season. His pace and ability was a constant threat to all defenders, which was one of the main reasons Reno finished the USL Championship’s regular season with the best overall record. Reno would go on to reach the Western Conference Semifinals for the second time in the club’s history.

Prior to Reno, the 27 year-old was a member of Ottawa Fury in 2019. In 35 total matches for the Canadian side, François scored 9 goals and added another seven assists. The winger previously spent time with Eastern Conference’s Pittsburgh Riverhounds in 2018, where he helped the club reach the 2018 USL Championship Playoffs playing in 32 league matches, adding four goals and five assists to his career totals.

François originally left his homeland of Haiti in 2010 after the devastating earthquake that hit the nation. After moving to the United States, he played at Saint Benedict’s Preparatory School in New Jersey for two years, and would later play collegiately for the University of Maryland’s Terrapins. François left Maryland after only two years to sign a professional contract with Major League Soccer’s D.C. United in 2014. His rookie season was spent on loan with the Richmond Kickers, where he made ten appearances, scoring one goal and picking up two assists.