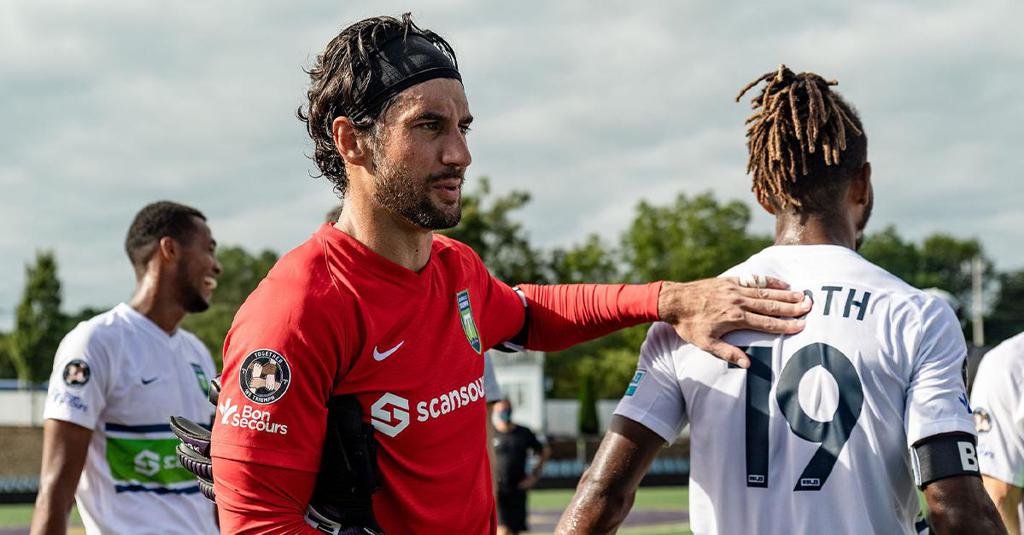 Greenville, SC - After collecting a point on the road last weekend, the League One Final-bound Greenville Triumph return to Legacy Early College this Sunday to face Union Omaha in the last home match of the 2020 regular season. The Sunday afternoon contest will mark the first time that Union Omaha and Greenville Triumph share a pitch, and with the home stretch upon us, Omaha will be searching for nothing less than three points.

Greenville clinched its spot in the League One Final two weeks ago and only needs one point across the next two games to earn home field advantage. Omaha, however, is right below the playoff cut with 23 points through 14 games played (6-3-5) and needs three points to stay alive.

The Owls are a young and hungry squad looking to make a first-year run to the League Final. To do so, they're going to have to go through the only squad to hold the top spot in the league this season. Omaha is a quality side that can counter off defensive set pieces very well. They're also undefeated (6-0-3) in matches in which they’ve scored a goal or more this season.

Much of this game will be determined on whether Greenville can maintain Omaha's "must-win" energy. But it will also depend on which Omaha attack shows up: the hard to beat, goal-scoring Owls or the Owls that went scoreless and winless for three straight games.

what to watch for:

Do What We Do: We've stated this for the entirety of the season, focusing on the opponent's strengths and weakness is important, but what is more important is focusing on what our team does well. Maintaining defensive shape, switching the point of attack, playing down the flanks, first-touches forward, etc. While Greenville has not faced the Omaha side yet, that fact matters very little with the Triumph's ability to control a match.

Final Third Connections: The Triumph attackers are all coming into form down the stretch. Alex Morrell is chipping away at every defense in the league, and Omar Mohamed's final ball is improving with every match. McLean is finding the back of the net more than ever and Jake Keegan looks more and more comfortable playing the ten. Mohamed said earlier this week that what is clicking for Greenville's final third right now is the connection and understanding of where each other want the ball.

What's At Stake: For Omaha, this is game cannot be lost. Of all clubs vying for a shot at the final, Omaha has the least amount of games remaining to be played and still trails Richmond (current team above the playoff cut) in games won (6 compared to 7). From here on out, it is do or die for the Owls, which will inevitably bring a different kind of energy to Sunday's game. For Greenville, a win or draw solidifies hosting duties and will earn the Triumph an undefeated record at home for the 2020 season.

Team of the Week: Triumph attackers Lachlan McLean and Omar Mohamed were named to League One's Team of the Week (Week 13) after connecting for Greenville's first goal in the 2-2 draw against FC Tucson. McLean was chosen for the fifth time this season, marking the most selections of any Triumph player and the second-most selections of any player in League One (E. Terzaghi, 6 selections).

Leaders: Lachlan McLean is the Triumph's newest point and goal leader after netting both of Greenville's goals against FC Tucson last Saturday. McLean, who has 14 points off six goals and two assists, is followed by Alex Morrell with 12 points from three goals and a league-leading six assists. The Aussie is tied for third in the Golden Boot race with Chattanooga's Greg Hurst, while Richmond's Emiliano Terzaghi leads with 10 followed by FTL's Ricky Lopez-Espin (7).

Injury Report: Abdi Mohamed (foot) and midfielder Max Hemmings (knee) were a part of the 18-man roster selection last weekend in Tucson, with Mohamed making his return to the field in the second half along with Triumph co-captain Aaron Walker. Walker returned to the pitch after suffering a head injury against Chattanooga. Defender Harri Hawkins (knee) returned to full-sided training last week. Carlos Gomez is currently the only Triumph player on the injury list as he recovers from shoulder surgery.

Standings: For fourteen straight weeks, the Triumph have held the top spot in the league with 32 points through 14 games played. Greenville is searching for one point across its' last two matches to solidify hosting honors for the 2020 USL League One Final. There are six teams vying to face Greenville in the final. In order currently: Richmond, Omaha, North Texas, Chattanooga, New England, Madison. Richmond is the only team in control of their destiny and needs two wins and a draw to move onto the Final. With a pivotal last match against a very good Chattanooga side, that task may be tougher than it seems. For Omaha, with only two games remaining, every game is a must win and they're going to need some help from sides like Richmond to make a historic first-year run to the Final. Since Arturo Rodriguez has rejoined the NTSC side, the defending League Champions are making a hard and fast run towards a rematch with Greenville. They face an NEII side that has beaten both of the league's top teams. While it is a long shot for Madison to make the final, they will be an important team to watch down the stretch. The Flamingos have the most matches remaining of any L1 side (4) and will face Chattanooga, NEII and North Texas. Although Madison's hopes for the postseason are slim, the Mingos will play a significant role in who Greenville takes on for the league title.

Golden Glove Bobbleheads: Dallas Jaye won the League's first ever Golden Glove award last season and could become to be first GK to win the yearly honor back-to-back. To celebrate his league-best 2019 season, GTSC is giving away 1,000 Dallas Jaye "Golden Glove" bobbleheads after this Sunday's match. The giveaway will begin at the 75th minute at both gates upon exiting the stadium. Get your tickets by clicking here.

Club News: In a partnership extension with the CW62, Greenville Triumph is excited to announce that the USL League One Final Match will be aired locally on The CW along with this Sunday's match and October 24th's match in Orlando. Head Coach John Harkes has been chosen to be apart of the American Cancer Society's "Real Men Wear Pink" Campaign. You can help Coach Harkes reach his $2,500 goal by clicking here.

Greenville will start and end their 2020 regular season in Florida as the league-leaders head to Orlando City to face the Orlando City U-23 side. The October 24th match will be broadcast locally on The CW62 as well as nationally on ESPN+.

Coastal Crust: Come to Coastal Crust Pizza on Triumph match days and use code word “Triumph” to receive one glass of Impero Montepulciano, Impero Pinot Grigio Trebbiano or Peroni with the purchase of a pizza or pasta. **One drink per one pizza/pasta. Kids pasta does not qualify. This is applicable to dine-in only. Customers cannot substitute for a different wine/beer.

Southern Culture Hospitality Group: Head to Habitap to watch Triumph matches on their big screen get half off your first beer by wearing your Triumph gear! Getting take-out? LTO Burger Bar is offering a match day curbside pick-up discount…get 10% off with online code “Triumph”.

Item of the Week: The Triumph team store at Legacy will be offering 40% off all items to celebrate the final home match of the season. Be sure to get there early on Sunday!

Clean Sheet. Clean Car: If the Triumph earn a clean sheet (meaning no goals allowed), you can get $3 off a Top Wash the day after at Fins Car Wash, no promo code required.

Tailgate Package: Download the Chick-fil-A app to earn special rewards the Monday after each match. Simply order food from the Pelham Road location, and put Together We Triumph in the special instructions box.