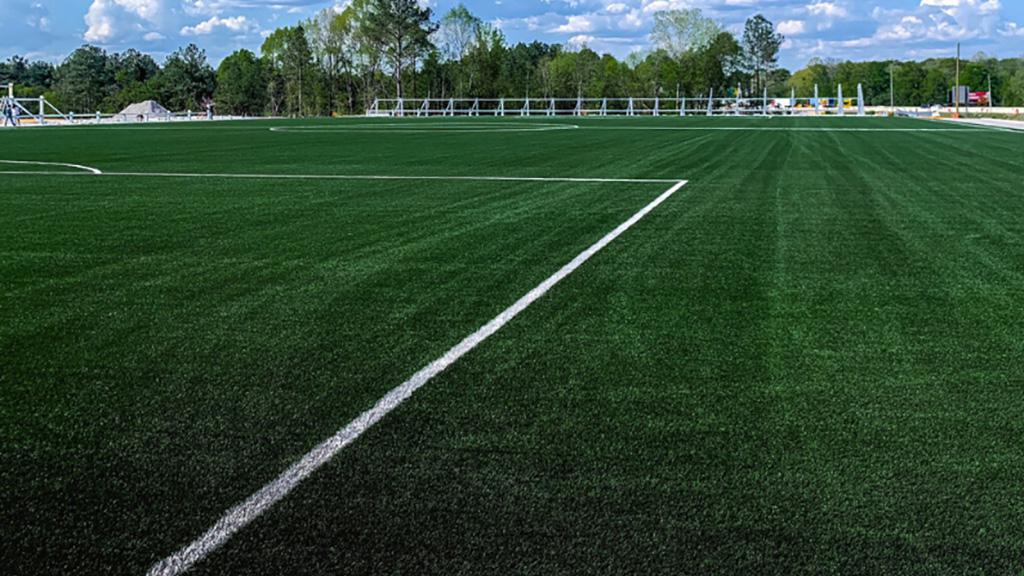 CHATTANOOGA, Tenn. – When it comes to the question of when live, professional soccer will be seen again, we are all searching for clarity.

For USL League One’s Chattanooga Red Wolves, however, what is clear is the tremendous promise that lies ahead.

Less than a year after the club broke ground on what will become CHI Memorial Stadium, the reality of the venue coming to life is now visible. The main turf field is fully installed and the skeleton frames of what will be the stands that make up the 5,300-seat venue rise from the ground, giving the club’s leaders and staff something big to look forward to when life returns to normal.

“I think in any massive construction project, it takes quite some time to get the foundation and the infrastructure started, so what looks to be very little progress – because it’s a lot of dirt moving, it’s concrete being poured – it’s hard to visualize that there’s actually something spectacular about to happen,” said Red Wolves General Manager Sean McDaniel this week. “Now, as we see the turf completely installed, we see the seats coming up out of the ground, there’s a real sense of excitement now because you can see this is going to happen.”

Construction on the project has continued under the requisite precautions dictated by local and national officials, with the work being deemed essential to the infrastructure of Chattanooga’s local economy. The club is working to appropriately follow the guidelines and rules that have been laid out as its new home continues to take shape.

And while there is still plenty to be done, McDaniel is optimistic that there will be soccer played at CHI Memorial Stadium in 2020. That outlook is one that pervades his overall outlook on how the club and its fans can come through the current COVID-19 pandemic and be stronger on the other side.

“Sports is one of the great pieces of culture that always gives hope for something,” said McDaniel. “Hope for the next game, hope for the next season, hope for the next signing, so we still have hope, and I think that’s the greatest thing we offer right now, that while we don’t really know what the future holds, we can plan for best-case scenarios, but as long as we maintain the hope of soccer coming back, the hope of sport being something for the fans and the community, we’re going to be just fine.”

It was a gorgeous day to get a tour of the @ChattRedWolves new digs. @CHI_Memorial Stadium is coming along quite well despite the season being on pause. Tune in to @WRCBsports at 6/11 for a better look at the progress! pic.twitter.com/iqNR4FhQJG

Not going to lie, seeing this beautiful green turf on @CHI_Memorial Field has me getting extra excited for when sports returns! @ChattRedWolves, I’m a big fan or your new home. Going to be the best stadium in all @USLLeagueOne! pic.twitter.com/uILGWD8XKq

The idea that the Red Wolves will take the field at its new home before the end of this year is music to the ears of new Head Coach Jimmy Obleda, who is taking his own sense of optimism and using it to make the best of the situation as he tries to form a cohesive squad for the club’s second year.

There are of course the individualized training sessions that are being sent to players to help them stay as close to 100 percent as possible while training in isolation. But as a new coach and with a number of new players having arrived in Chattanooga this offseason, Obleda is also focused on building on the camaraderie within the squad that it had begun to foster in the four weeks of preseason prior to the current shutdown.

That means as well as training sessions, Obleda and his team are creating contests that keep the players competing against each other for prizes and bragging rights, which in turn is keeping the conversation and chatter amongst the squad lively as they wait to resume work together.

The squad is also using Zoom and Google Hangouts for its regular training sessions, with coaches breaking out different groups to try and maintain that sense of unity. The technology now available – which Obleda marvels at – is making life somewhat more manageable in a situation that is nothing like he’s experienced before.

For both Obleda and McDaniel, the hope is the Red Wolves and the rest of their League One counterparts can get the 2020 season underway soon, and their preparations in their respective spheres are mirroring that outlook. On McDaniel’s end, that has meant staying in regular contact alongside the club’s other front office leaders with USL leadership, where communication as to the path forward has been clear from Day 1.

“I think the USL has done an incredible job of consistent, relevant communication,” said McDaniel. “Where I think the USL has done a very good job is getting through the weeds on all these different stories and focusing on things that impact their clubs. [USL League One Vice President] Steven [Short], [USL Executive Vice President] Court [Jeske], [USL Senior Vice President, League Operations] Brett [Luy], all those people have been really on top of relevant communication, timely communication and things that impact the teams the most.”

As the club waits for the all-clear to return to action, however, it is focused on remaining as connected to its community and its fans as it can. The club has pledged to donate 100 percent of merchandise sales over the current two weeks to the YMCA’s Food Program, an initiative that has already seen 650 meals be procured.

“That to me is probably the thing the Red Wolves have worked the hardest at doing well, and beyond just connecting to the community, really connecting in such a way that all of Chattanooga and the region feel like we’re here to be a help,” said McDaniel. “With our own academy, we do video meetings with the first team players so these young players in our academy can hear the story of what it takes to become a professional footballer.

“Our initiative with public service announcements with CHI Memorial, telling people to stay safe and stay home, these are all initiatives that don’t help our bottom line, but it tells the people in the Chattanooga community that we’re here with you, we’re here to stand alongside you, and I think we’ve done a very good job continuing to do that.”

Coach Lessentine’s 06 Boys had a surprise guest appearance from our GK @AlexMangels last night!
Staying connected during the quarantine is important and doing it with our @CRWAcademy is always special.
Stay safe and #StayHome pic.twitter.com/TTq6cVwRjv

And when life does return to a sense of normalcy, the Red Wolves will be ready to welcome their fans to a new home that will pave the way to a strong future for the club and the city together.

“For us internally, we have the hope of playing in a brand new, beautiful stadium,” said McDaniel. “That hope is what drives us towards letting people have a wonderful time on a Saturday night watching the Chattanooga Red Wolves. While the challenge exists of not knowing the when, we overcome that by always planning for a great football experience, so when we are able to get back out on the pitch, we’re hitting the ground running.”