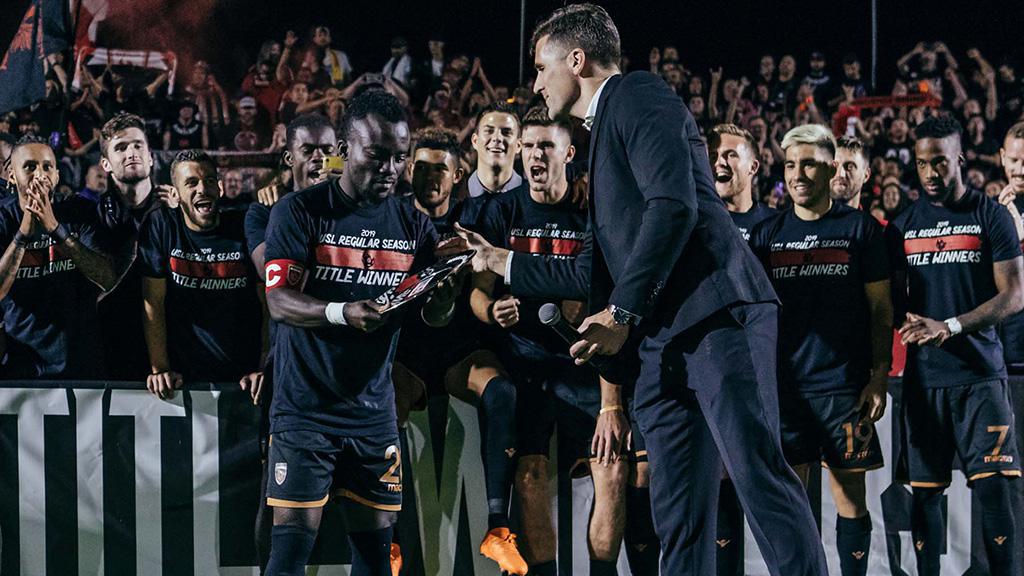 Thursday’s decision to temporarily suspend the USL Championship season and delay the start of the 2020 League One campaign came about through the swift decision-making of the ownership groups within both leagues said USL Vice President of Communications, Ryan Madden, during radio interviews in Indianapolis and Albuquerque over the weekend.

But the monitoring of the virus and the potential impact on the league had been under consideration at both USL HQ and its clubs for some time.

“When you make the decision to work in professional sports and you come to the office every day at a league office or a club, you have a responsibility – just given the nature of these jobs – to think about things like this,” Madden told Greg Rakestraw on 107.5 The Fan’s Soccer Saturday show. “With or without a glaring public health emergency, we’re always thinking about potential crisis situations and how we would respond to that.

“Specific to COVID-19 and the Coronavirus, we had been working on contingency planning from very early on. As soon as it became clear many, many weeks ago that this posed a real threat to international public health, we began discussing the possible impact it may have on our leagues – on USL Championship, League One and League Two.”

As news rippled through the sports world on Wednesday night and into Thursday morning, the decision at the league offices was made to put it to a vote for the Championship and League One ownership groups to decide the course of action that was going to be taken. Those events were certainly noted by many within the league’s front office and club leadership, but the unanimous vote to suspend the Championship’s season and delay the start of League One’s new campaign by both sets of ownership groups illustrated the importance placed by all in putting the safety of players, staff and supporters first.

“Eventually what happened, insular to what was going on with the other leagues around the country, we all collectively understood where this thing was trending, and where it was going, and if we were going to put the health and wellness of everyone involved first, there was really no decision to be made,” Madden told United Weekly’s RJ Montano and David Carl on 101.7 The Team’s United Weekly. “There was universal recognition that it was the right thing to do and that showed in the vote where every single owner from around the country recognized that this was in fact the right course of action.”

While the decision was unanimous and supported by fans across the Championship and League One, Madden certainly shared the disappointment of many fans that action on the field was going to be suspended for the time being. After the build-up to the Championship’s 10th anniversary season and the momentum the league had built prior to the opening weekend of the season, going for a while without live soccer to attend is that last thing anyone wanted.

“I think the fans responded in the same way that you and I did,” Madden told Montano and Carl. “There was so much anticipation and build-up and excitement, it had been a long offseason and we all could not wait to see these clubs back on the field, competing against each other, trying to win soccer matches and lift trophies.

“I think the initial reaction was twofold. One, it was near universal recognition that, yes, this is the right thing to do, but two, it was disappointing, because we had all invested so much energy physically, emotionally and otherwise into the start of this season. For us only to get one week in was disappointing, but like I said at the end of the day – and you said it well – I think everyone responded in the right way, which is we understand that this is about a lot more than soccer and we all have to stick together.”

For now, USL is working diligently to make sure all key information it receives is being disseminated among clubs in the Championship, League One and League Two to allow an informed decision to be made on next steps.

“We are also on a task force which is made up of members from other professional sports organizations around the country – U.S. Soccer, Major League Soccer being a couple of those – and based on the results of the guidance we’re being given both from health authorities and the task force, we make recommendations and provide regular updates to our member clubs, both in the Championship, League One and League Two.”

And what’s going to happen between now and when we do see live action at venues around the Championship and League One? Well, the league’s digital department is working on ideas that will engage – and hopefully amuse – fans as we wait for the games to resume.

“It’s disappointing for us, it’s disappointing for players, and I think most of all it’s disappointing for supporters, so what we’re going to have to do is figure out a way to still engage with people and try to provide some levity,” Madden told Rakestraw. “I think sport, as you know better than most, really has the opportunity to provide a welcome distraction, or lightness to people’s lives in a time of hardship. We wish that we could play that role in our matches on the field, but what we’re going to have to do is come up with some cool digital, social, and content strategies that allow us to still provide that for fans in the absence of matches. We’re doing our absolute best, and we’ll keep trying to make our supporters proud.”