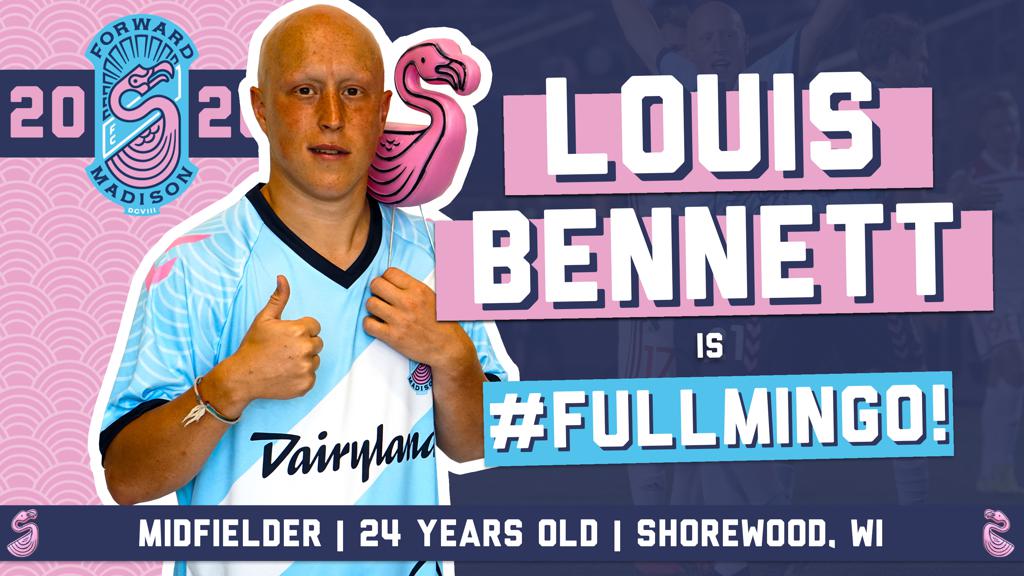 Forward Madison FC has re-signed Wisconsin native Louis Bennett, the club announced Friday. Bennett, who hails from Shorewood, played nine games for the Flamingos while on loan from Memphis 901 FC in 2019.

According to Head Coach and Technical Director Daryl Shore, Bennett’s signing represents the progress Forward Madison is making both on and off the field in 2020.

“Any time we can keep quality Wisconsin players in the state to play with Forward Madison, it’s a good thing for both the team and the community,” Shore said. “Louis is a smart player, he has a great passing range and we felt like he fit in well with our group towards the end of last year.”

Bennett, a left-footed midfielder, is Forward Madison’s third Wisconsin-born player, joining J.C. Banks (Milwaukee) and Carl Schneider (Madison). Bennett played under his father, Louis Bennett Sr., at Marquette University, where he was named to the All-Big East team in 2015.

Bennett started his professional career in Cyprus before moving to Swope Park Rangers of the USL Championship in 2017. He then played in the the Czech Republic with MFK Vyškov before signing with Memphis in 2019, finally arriving in Madison on a loan deal last July.

“I’m really excited to be back with the club and in the community again,” Bennett said. “I want to bring a championship to Madison, and I can’t wait to keep developing soccer in my home state.”

Bennett spent much of his game time as a box-to-box midfielder in 2019, but can shift around to different areas of the pitch. According to Shore, Bennett’s left foot provides a unique weapon in Forward’s arsenal.

“Being a coach’s son, Louis is a player who has a strong soccer IQ,” Shore said. “He can play a couple different positions in the midfield, he reads the game very well and he’s very dangerous from set-piece situations. We’re very pleased that we’ve been able to keep Louis in our group.”