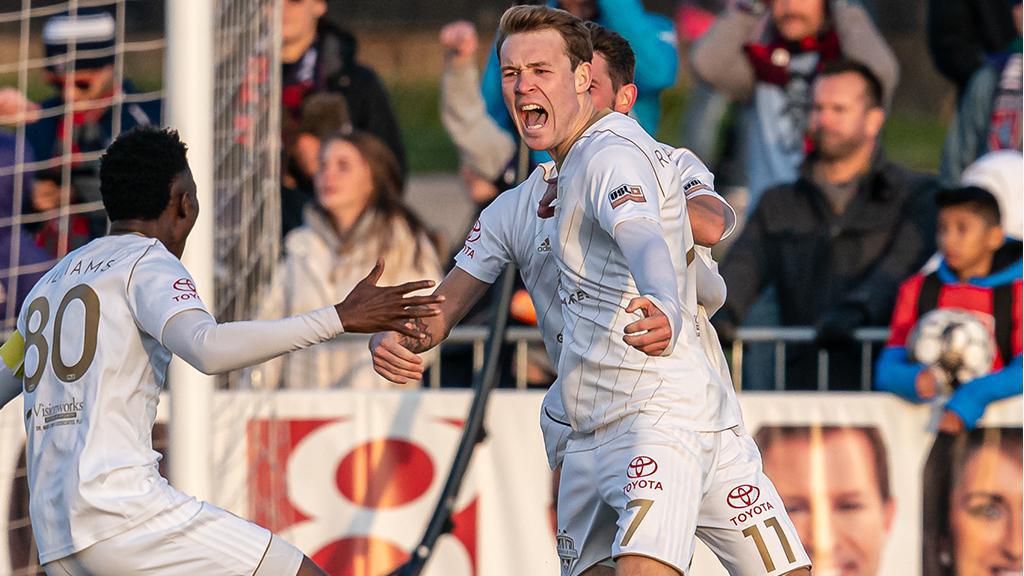 Louisville City FC will host the Championship Final at Lynn Stadium on Sunday, November 17 at 7:30 p.m. ET. The game will be aired live on ESPN2 and ESPN Deportes in the United States.

The Monarchs reached their first Championship Final after battling past El Paso Locomotive FC, which played for more than an hour down to 10 men before Erik Holt’s 120th-minute goal lifted Real to victory in front of its home fans at Zions Bank Stadium. The Monarchs will now try to make history by becoming the first road team to claim victory in the Championship Final in the game’s history.

INDIANAPOLIS – Louisville City FC scored in the fourth minute of stoppage time to send the game to extra time before pulling away from hosts Indy Eleven in front of 7,171 fans at Michael A. Carroll Stadium. In a tense contest, Indy took the lead in the 67th minute when Tyler Pasher ran onto a flicked through-ball by Dane Kelly and fired low into the left corner. That looked like it might be enough to send the hosts through, but with what may have been Louisville’s final opportunity on a corner from the left, the ball skimmed a cluster of players at the near post and reached Antoine Hoppenot, who fired home a first-time finish to level the score and send the game to extra time. Louisville needed only four minutes to take the lead in the extra session when Brian Ownby created space on the left for a low cross that was flicked on by Abdou Thiam to Magnus Rasmussen, who dispatched his 16th goal of the season into the right corner.  And with seven minutes to go, Luke Spencer converted from the penalty spot after Ownby had been brought down in the area to clinch a third consecutive trip to the USL Championship Final for the visitors, to the delight of a large contingent of travelling support.

No. 4 Real Monarchs SLC 2, No. 6 El Paso Locomotive FC 1 AET (Full Report & Highlights)
HERRIMAN, Utah – Real Monarchs SLC scored in the 120th minute to earn its first trip to the USL Championship Final and bring to an end a remarkable inaugural season by El Paso Locomotive FC at Zions Bank Stadium. Locomotive FC had taken the lead in first-half stoppage time when Andrew Fox hammered home a low finish off a set piece, but the Monarchs replied three minutes into the second half when Kalen Ryden finished off a set piece for the hosts to level things up. El Paso then went down to 10 men as James Kiffe was sent off for his second yellow card in the 51st minute, but the visitors stood firm and still managed to create chances as the game ended all square after 90 minutes and went to extra time. Locomotive FC’s resistance finally fell in the last minute of the second period, however, as Noah Powder’s corner kick from the right was headed home by Erik Holt into the left corner of the net, sending the Monarchs and their fans into wild celebrations as they claimed the Western Conference title.