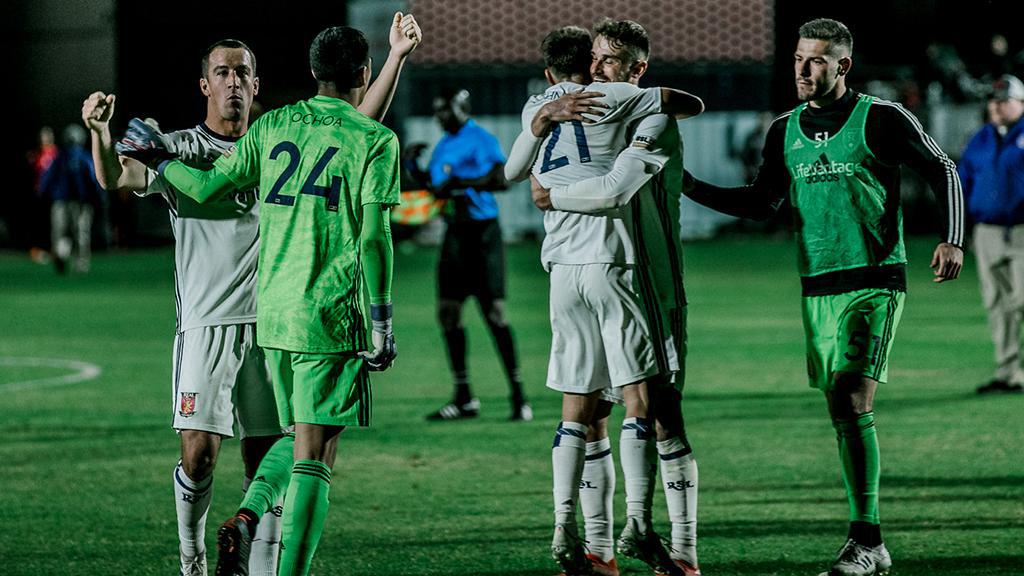 Then on Saturday night, No. 4 seed Louisville rallied from an early deficit before veteran captain Paolo DelPiccolo scored in extra time to send his side past Eastern Conference No. 1 seed Pittsburgh Riverhounds SC, while No. 3 seed Indy Eleven brought No. 2 seed Nashville SC’s time in the Championship to an end with a 1-0 win at First Tennessee Park.

Western Conference No. 6 seed El Paso Locomotive FC proved the lone host to prevail late on Saturday night as it scored a 3-0 victory against No. 7 seed Sacramento Republic FC at Southwest University Park to keep its bid for a title in its inaugural season alive as it heads to face the Monarchs in the Conference Final.

PITTSBURGH – Louisville City FC veteran Paolo DelPiccolo scored in the 118th minute to earn his side its first road postseason victory in club history – and its 10th consecutive playoff victory overall – as it eliminated top-seeded Pittsburgh Riverhounds SC in front of a Highmark Stadium-record crowd of 6,073 fans. The Hounds got on top in the 11th minute when Thomas Vancaeyezeele flicked home a near-post header off Kenardo Forbes’ corner kick from the left, and the hosts held the initiative early in the contest. Pittsburgh almost added a second four minutes into the second half through Neco Brett only for Louisville defender Paco Craig to clear the chance off the line, and two minutes later LouCity pulled level as Luke Spencer bulled his way through two defenders and shot low from 15 yards. That sent the game to extra time, where Louisville almost took the lead in stoppage time of the first period when Abdou Thiam hit the right post with a shot from the edge of the area. With two minutes to go and a penalty shootout looming, however, a low cross from the right by Brian Ownby found Thiam for a close-range finish that was saved, but DelPiccolo was in the right place to head home the rebound and send the visitors through.

NASHVILLE, Tenn. – Tyler Pasher scored the only goal as Indy Eleven advanced to the Eastern Conference Final for the first time as it eliminated Nashville SC before 4,174 fans at First Tennessee Park. Indy came out aggressively and had the better chances in the first half, the best of which saw Dane Kelly force a low save from NSC goalkeeper Matt Pickens in the 29th minute. Just before the hour-mark, however, Pasher put the visitors ahead with a deft first-time finish off a lifted through-ball by Tyler Gibson into the left corner of the net. Nashville tried to pull back into the game, and had a goal ruled offside in the 89th minute when the flag was raised on Justin Davis after he redirected home a shot by Matt LaGrassa, but Indy returned home with victory as it held firm late.

No. 4 Real Monarchs SLC 2, No. 1 Phoenix Rising FC 1 (Full Report & Highlights)
PHOENIX – Real Monarchs SLC rallied from a first-half deficit to earn the right to host the Western Conference Final of the 2019 USL Championship Playoffs as goals by Jack Blake and Maikel Chang earned victory against Phoenix Rising FC in front of a sellout crowd of 7,548 fans. Phoenix took the lead in the 25th minute when Junior Flemmings latched onto a through-ball by Adam Jahn and slid his finish past an advancing goalkeeper and just inside the left post, but the Monarchs hit back eight minutes later when Blake’s angled shot from 20 yards found the left corner of the net. Chang then put Real up two minutes before halftime when he created space for a low shot to the bottom-right corner from 15 yards. Phoenix had the better of the second half, but was unable to convert on its best chance to equalize when a free kick by Jon Bakero found Jahn for a powerful header that was parried by Monarchs goalkeeper David Ochoa, only for Joey Farrell to send the rebound over the crossbar from close range with 15 minutes to go. Real saw out the game from there, recording its second victory at Casino Arizona Field this season.

EL PASO, Texas – El Paso Locomotive FC pulled away late to earn victory in its first home playoff game in its inaugural season as it defeated Sacramento Republic FC before a crowd of 7,460 fans at Southwest University Park. Locomotive FC’s Omar Salgado had a pair of good chances in the opening half, but five minutes before the break the hosts took the lead as Josue Aaron Gomez flicked home a header off a free kick by James Kiffe to put El Paso ahead. Sacramento came out more aggressively to start the second half and Thomas Enevoldsen had a shot deflected just high in the 66th minute before a minute later Drew Skundrich had a header cleared off the line by El Paso defender Andrew Fox. Republic FC’s Dekel Keinan then hit the crossbar with 11 minutes to go with a looping header aimed for the top-right corner, and a minute later Cameron Iwasa found a pocket of space after a low cross to the top of the penalty area but was denied brilliantly by Locomotive FC goalkeeper Logan Ketterer. El Paso added an insurance goal from the penalty spot in the 83rd minute, however, as Salgado was brought down in the area allowing Sebastian Contreras to convert to the bottom-left corner, and with two minutes remaining Sebastian Velasquez put the game away with a powerful shot to the right corner from the left side of the penalty area that wrapped up the victory for the hosts.